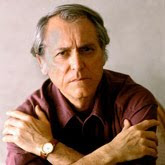 We students in UW’s MFA creative writing program were treated to lunch with Don DeLillo today. A quiet speaking man who looks with intensity, he gave us some insight into his writing.

Asked who his influences were when he began writing, he said the literary force at the time was Norman Mailer, who he read and admired, and met some years later. He was also reading a number of European writers. While in college, Hemingway was the guy. He and his friends would talk in Hemingway dialogue. And it was mostly male writers who they looked up to, because male writers dominated the genre. He talks about his first writing being uncontrolled; didn’t feel like he knew what he was doing, but he knew he was a writer. He was looking for his voice.

Asked about the research he does for his novels, he said that you can’t make this stuff up. For example, when reading about people in FBI reports, he said how, “the details take on a significance that make up a life, even though that life may seem insignificant.

Asked about the construction of a novel, he said he works mostly through intuition. At some point, he is compelled to begin writing. He quoted Hemingway, “get black on white.” He just begins to write sentences and sees what he gets. In writing Libra, he alternated the chapters, but 3/4 of the way through, the chapters merged — the conspiracy becomes a life and the life becomes the conspiracy. And that construction was all intuitive.

He talked about his great interest in visual art, especially abstract art, and thought this the equivalent of what he feels he does as a literary artist. The visual artist putting a blob of blue paint here and a blob of red paint there; he likened this to how he as a writer constructs a story, yet he strives for rhythm, repetition, and balance.

He also talked about living in Greece and the not-modest presence of terrorism, the representation of which took place every day with some kind of explosion on the street, sometimes within five blocks of where he was living. At the time, there were many refugees from Lebanon. There was a strong anti-American attitude. There was terrorist activity taking place in New York in the 1970s. When the events of Sept. 11 happened, the last thing on his mind was writing. Five days later, they were able to get into lower Manhattan, and he wrote an essay at that time about it. It was not until several years later when he saw a photograph of a man in a suit carrying a briefcase walking through the ash that the idea for a novel really sparked. He thought about if the briefcase didn’t belong to the man in the photo; not a profound idea but it brought him into the book.

Asked if he found any part of writing unpleasant, he said, “not unpleasant, but challenging.” He finds things in the words that invigorate him. He talked about the fine points that call for illumination, but when you don’t is when the writing is crap. He still wrestles with sentences. He feels that writing is all about yourself and how your mind works and your level of seriousness. He felt like his early stories were not necessarily asking to be written. “I was capable of doing them, but there wasn’t a need for them.” He likes using immediate source material–descriptions of a voice, a street. He gave the example of when he was living in Greece, a Greek man paying a bill, which he said was quite a process. He considers these the mysteries of life.

About the actual writing process, he says he came upon a technique that he uses. He types on a manual machine. When he has completed a paragraph, he changes to a new sheet of paper, even if the sheet only has three lines on it. This way, when he reads it, there is no interference from other text. Doesn’t happen with every book–one book he was writing flowed out of him so quickly, he felt like he’d written 100 pages in three days. The Body Artist was much less spontaneous, it felt like he only wrote a sentence a day; he had to will the story out of himself. His working practice consists of his writing 3-4 hours in the morning, taking a break, getting back to it for a couple of hours around 5, then sometimes doing some sentence rewriting around 11. He says, “that’s what I needed when I was younger; now it’s automatic, I just go into the room after breakfast. I don’t begrudge the time.”

Another note on Libra: He remembers reading about Oswald living in the Bronx when he was thirteen, and DeLillo was sixteen; and how Oswald would play hooky and go to the Bronx zoo. DeLillo would also sometimes play hooky and go to the zoo, and he began to think about if he may have even seen Oswald on the street somewhere, crossed paths with him. He did a great deal of reading for the book, and he found it all extremely interesting. John Malkovich did a play about Libra at Chicago’s Steppenwolf Theatre. DeLillo was active in the process and talked about the play experience, to writing a script, which is the easiest part, “all dialogue,” to the actors reading the play and then the putting on of the play. How audiences differ from city to city, not even laughing at the same parts. Playwriting is 3-dimensional — getting it on paper, getting the cast to perform it, and then the audience. A play has a great deal of mystery about it.

Asked about the book End Zone, he said that he’s received a really good script (after receiving a couple very bad attempts) from a couple of scriptwriters who want to make a movie out of it, but they can’t come up with the funding. Unfortunately, independent filmmakers have to ask for European money, but because the story involves American football, not many in Europe are keen on funding the film.