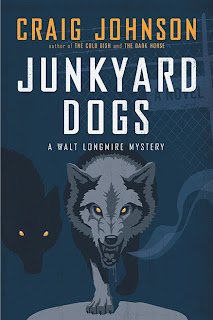 A television series based on Craig Johnson’s Wyoming sheriff Walt Longmire from the Viking/Penguin novels is in development with Warner Horizon Television and TNT. Golden Globe and Emmy Award–winning Greer Shephard and Michael M. Robin (The Shephard/Robin Company) are executive producing alongside Hunt Baldwin and John Coveny, who are adapting the novel for the screen. Greg Yaitanes is attached to direct. Shephard and Robin are currently executive producers on The Closer (TNT). Among other projects, they executive produced Nip/Tuck (FX) and Trust Me (TNT), the latter created and produced by Baldwin and Coveny. Yaitanes is an executive producer and Emmy Award-winning director on House (Fox). Johnson is currently on tour with Junkyard Dogs, the sixth novel in the award–winning series. When asked who he thought should play the tough but tender sheriff, Johnson, who has been retained as a creative consultant, replied, “Gary Cooper, but he’s not returning our calls.”