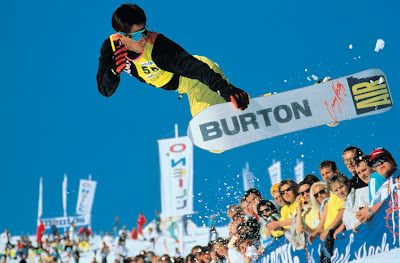 The Alpinist Film Festival has announced that it will present “Let It Ride: The Craig Kelly Story” on Jan. 17, 2008, at the Walk Festival Hall in Teton Village.
An AFF press release describes the film as “an acclaimed celebration of the life and snowboarding of legendary rider Craig Kelly…. While Jake Burton created the origins of snowboarding, the pursuit as an industry, a profession and a lifestyle owes Craig Kelly a profound debt. The director of Let It Ride, Jaques Russo, met Kelly in the late 1980s, when snowboarding was still in its infancy and Kelly was just beginning to ride. Kelly soon began to make an impact on the sport, amassing more than seven World Snowboard Championship titles. Million-dollar contracts and the X-games soon followed, but Kelly eventually dropped out, quitting the competitions to search the world’s mountains for big new lines. Russo maintained his contacts with the athlete, and spent over a decade filming him in such disparate places as India, Iran, Greenland, South America and Japan.”
On January 20, 2003, an avalanche near Revelstoke, B.C., Canada, took Kelly’s life, as well as the lives of six others. After Kelly’s death, Russo compiled his footage from the preceding years—as well as footage from other filmmakers concerned with telling the story — and culled the rest to create a film that is both a documentary on the history of the sport, and the story of one of its most influential participants.
A rough cut of “Let it Ride” won “Best Film” at both the Whistler and the X-Dance film festivals (it also won best soundtrack at the latter). The Alpinist Film Festival screening will be the first of the finished film.
The 2008 Alpinist Film Festival will feature its Snow, Surf and Stone nights January 17-19 at Walk Festival Hall in Teton Village. A fourth evening, The People’s Choice Ceremonies, will present the People’s Choice award-winning films from the previous three evenings at the Center for the Arts in downtown Jackson. As an official entry into the AFF, “Let It Ride” will be in contention for the People’s Choice Awards. Winners of the individual evenings receive a gift certificate from Patagonia worth $750. The grand-prize winner receives an additional gift certificate worth $1,500.

Tickets for The 2008 Alpinist Film Festival are $18 for the Snow, Surf and Stone nights and $20 for the People’s Choice Ceremonies. Tickets and additional information can be found online at http://www.alpinist.com/film_festival.
The festival’s mission is “to advance the art of cinematographic storytelling as it underscores the unity among the adventure lifestyle communities. A portion of every year’s proceeds are donated to charities that help preserve the places of our inspiration. Because one of these places is our planet, beginning in 2008, the festival will purchase carbon offsets to counteract its
carbon footprint.”
Sort By Category By Month By Year
Cancel