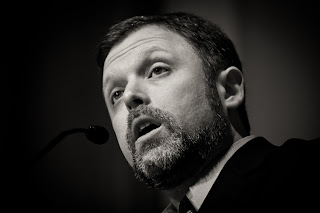 Tim Wise, anti-racist essayist, author and educator, is the keynote speaker Wednesday, March 28, for the University of Wyoming’s 16th annual Shepard Symposium on Social Justice. Wise will speak from 4:30-6 p.m. in the Wyoming Union Ballroom. “Identities: Dismantling the Boxes” is the theme of this year’s Shepard Symposium, which runs March 28-31.

Wise, who is among the nation’s most prominent anti-racist writers and educators, has been called “one of the most brilliant, articulate and courageous critics of white privilege in the nation,” by best-selling author and Georgetown University Professor Michael Eric Dyson.

Wise is the author of six books, including the highly acclaimed memoir, “Affirmative Action: Racial Preference in Black and White”; an essay collection, “Between Barack and a Hard Place: Racism and White Denial in the Age of Obama”; and his recent book, “Dear White America: Letter to a New Minority.”

In 1997, former UW College of Education faculty members Omawale Akintunde and Margaret Cooney organized the first symposium, then called “The Symposium for the Eradication of Social Inequality.” Since then, the symposium has evolved into a major national conference that engages participants in discussion and analyses of strategies and actions that can eliminate social inequality.

Honoring the work of the Shepard family and the memory of their son, Matthew Shepard, a UW student and social activist who was murdered in 1998, the symposium’s name was changed in 2002. That spring, the Shepard Symposium received funding from an anonymous endowment given to UW to pursue social justice activities throughout the campus.

The symposium is a living reminder of the need for information and dialogue about social justice concerns in America and beyond.

“We want people to deconstruct and interrupt the ways in which proscriptive identities are forced upon members of marginalized groups by society,” says Chair Angela Jaime in explaining the latest theme for the symposium. “Specifically, we hope that attendees will critically examine the ways in which society forces people to identify with certain membership groups.”

Various presentations will be made during the symposium. Highlights include:

Beth Loffreda, UW Department of English associate professor, will present the plenary speech, “The Consequences of Identity,” at the noon luncheon Thursday, March 29, in the Wyoming Union Ballroom. She is the author of “Losing Matt Shepard.”

Bridget Kisling, a junior music therapy and psychology student at Anna Maria College (Paxton, Mass.), will use a life-size version of the 1950s Barbie doll to shed light on how the media plays a significant role in shaping a young girl’s sense of body image. Her presentation is Friday, March 30, 1:45-3 p.m., in the Wyoming Union Big Horn Room.

An endnote student panel discussion, “Boxed In,” will be presented Friday, March 30, at 11:30 a.m. in the Wyoming Union Ballroom. UW students will discuss complex and misunderstood identities.

The second annual Shepard Symposium Friday Night Party is from 10 p.m.-1:30 a.m. at the Library Bar and Grill. All proceeds benefit the recognized student organizations that have contributed time and efforts to the Shepard Symposium. Tickets are $5 at the door or $4 in advance, and can be purchased at the symposium.

For more information about the Shepard Symposium, visit the website at http://www.shepardsymposium.org/, or contact Jaime at (307) 766-3991 or email jaimea@uwyo.edu.

Photo: Tim Wise will be the keynote speaker for the 16th annual Shepard Symposium on Social Justice.