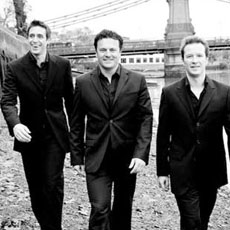 Tenors Un Limited — ‘The Rat Pack of Opera’ — began performing in 2002. In July of 2008, Paul Martin of the Tenors married Casper’s Lila McConigley, and ARTCORE had the honor of presenting the four performers in concert. We are delighted to have the Tenors back and glad that the Laramie Plains Civic Center also is presenting them!

Using talents honed in their previous solo careers in the opera, theatre and recording worlds, they set out to bring their own unique blend of wit, charm and vocal arrangements – along with original compositions – to the classical crossover genre.

Scott, Paul and Jem have performed alongside such notables as Sting, Hayley Westenra, Lionel Ritchie, Simply Red, soul diva Beyoncé and the Royal Philharmonic Orchestra…just to name a few.

During the past 9 years they have entertained diverse audiences throughout the world and in 2009, the guys had the honor of performing the traditional anthem ‘Abide With Me’ at a sold out Wembley Stadium for the 2011 FA Cup Final, which reached an audience of 100’s of millions worldwide and have just completed their 3rd studio album ‘The Rat Pack of Opera.’

They are based in London and are currently writing their fourth album.