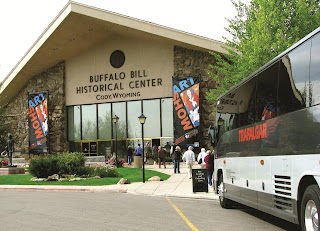 One reason you see so many buses in the BBHC parking lot on summer days:
The has been honored as one of ’s “favorite museums for group travelers” by the National Tour Association (NTA). The Center won the NTA’s Bronze Award in the category, tied with ’s of Natural History. Other winners include the Gold Award presented to the Smithsonian Institution and the Silver Award to the Metropolitan Museum of Art in .
“We definitely have cause to celebrate at being included in the distinguished company of the Smithsonian, MOMA, and the of Natural History,” says Bruce Eldredge, the Center’s executive director and CEO. “Our numbers of group tours have increased significantly in the last few years, and we couldn’t be more thrilled with this prestigious award from NTA. This honor acknowledges how engaging our group travelers find our galleries and is sure to draw even more attention and visitors to the Center and to Cody.”
Last August, NTA tour operators completed a survey in which they named their favorite NTA supplier partners or destinations in 12 different categories. In the January 2012 edition of Courier, the organization’s member magazine, NTA introduces its “Distinguished Dozen” winners in a feature that celebrates these member favorites. Award winners were officially acknowledged at NTA’s Annual Convention on December 8 in .
“We’ve created a number of programs to enhance the group tour experience,” adds Debra Elwood, group sales coordinator. “This award tells us our efforts are paying off!”
The National Tour Association is the leading association for professionals serving travelers to, from, and within . Founded in 1951, NTA membership represents more than 40 countries, 1,500 tour operators, 600 destinations, and 1,500 tour suppliers.
Other recent accolades for the include a listing in Cowgirl Magazine’s 2012 Ten Favorite Western Art Museums, and a No. 2 ranking by the travel Web site Go Nomad.com in its list of The Ten Best Family Destinations for Learning Vacations.
At the top of the Nomad list is the Baseball Hall of Fame in , , with the in , coming in third. Other entities on the list include International Folk Art Museum, Santa Fe, New Mexico; Maritime Museum of the Atlantic, Halifax, Nova Scotia; Mystic Seaport: Museum of America and the Sea, Mystic, Connecticut; National Cowboy and Western Heritage Museum, Oklahoma City, Oklahoma; National Underground Railroad Freedom Center, Cincinnati, Ohio; Rock and Roll Hall of Fame, Cleveland; Ohio; and Royal Canadian Mounted Police Heritage Center, Regina, Saskatchewan.
For more information about group sales, contact Elwood at debrae@bbhc.org,307.578.4114, or explore http://www.bbhc.org/visit/group-sales.
Sort By Category By Month By Year
Cancel