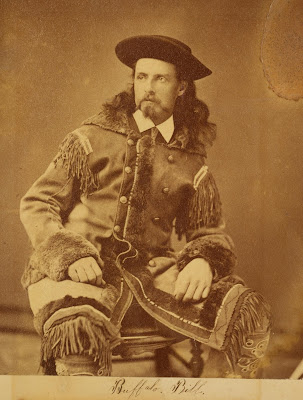 From the BBHC in Cody:

In the late nineteenth and early twentieth centuries, Buffalo Bill took his Wild West to Europe for two extended tours, 1887 – 1892 and 1902 – 1906, to the enjoyment of audiences eager to see its portrayal of the American West. This June, the first in a series of international conferences takes Buffalo Bill back to Scotland, where the Wild West appeared in 1891 – 92 and in 1904.

On Thursday and Friday, June 3 and 4, The Papers of William F. Cody, a project of the McCracken Research Library at the Buffalo Bill Historical Center in Cody, Wyoming, and the School of Humanities, University of Strathclyde, Glasgow, Scotland, present “Buffalo Bill and Europe: the First International Cody Studies Conference” in Glasgow. A similar conference comes to Cody in August.

The conference shares the progress thus far of The Papers of William F. Cody, a long-term, collaborative research and digitization project to compile an authoritative collection of the documentary material available on Cody and his persona of “Buffalo Bill.” The resulting digital archive and associated texts produced by the project will offer an invaluable record—in a single source—of late nineteenth and early twentieth century American development, especially the expansion and growth of the American West.

According to Jeremy M. Johnston, the recently-named managing editor of the project, “This conference furthers the main goal of The Papers—promoting serious scholarly research of this key international celebrity, ‘Buffalo Bill,’ and the western pioneer, William F. Cody.”?

Most of the speakers at the conference are project editors. “The lecturers will present various scholarly interpretations of the legends and legacies of Buffalo Bill’s associations with Europe,” says Johnston. Presenters will cover topics as diverse as the Wild West’s advertising techniques, the show in Europe, native exploration of Europe, the “transnational celebrity” and death of Buffalo Bill, and financing his western investments. Current issues such as the digital frontier as it relates to the project and curriculum development are on the program as well.

Among the speakers are Johnston, former managing editor Kurt Graham, before his recent move to Utah; John Rumm, curator of western American history at the Historical Center; and Maryanne Andrus, Historical Center education director. Editors Chris Dixon of the University of Strathclyde and Gretchen Adams of Texas Tech University are also on the program, along with associate editors from the Smithsonian, Harvard, Eastern Washington University, Brigham Young University, and University of Nebraska.

The conference marks the launch of two series of texts that will be published by the University of Nebraska Press: Cody Papers and Cody Studies together include primary and contemporary secondary sources from Cody’s time and scholarly studies on Cody and his work. The Papers will publish a small volume containing the talks presented at the conference. Two forthcoming publications of The Papers are the annotated and updated editions of Charles Eldridge Griffin’s 1908 publication Four Years in Europe with Buffalo Bill (fall 2010) and William F. Cody’s The Life of Hon. William F. Cody, Known as Buffalo Bill: the famous hunter, scout and guide: an autobiography (2011).

More information on the conference can be found at www.strath.ac.uk/pdu and clicking on “Conferences.” The next Cody Studies Conference takes place in Cody, Wyoming, August 5 – 7.