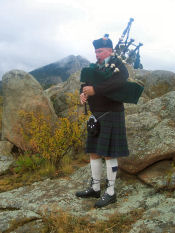 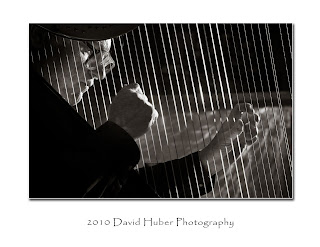 The “Made in Wyoming” Chamber Music Series is pleased to announce a substitute concert for the concert scheduled for March 18.  The concert will have a seasonal, Celtic theme.  For reservations, please call 307-214-2359 or email to WyomingChamberMusic@yahoo.com.
The new concert on Friday, March 16, features Celtic music from all six Celtic cultures, with Dave Shaul (bottom photo) on Celtic harp and vocals. Irish, Scottish, Welsh, Cornish and Manx music will be presented.  Background will be provided, so that the audience can better understand the actual diversity of Celtic music. It will be at 7:30 p.m. at the Nagle Warren Mansion B&B in downtown Cheyenne.
Piper Jim Taylor (top photo), of the Southwest Wyoming Band, will join Dave on small pipes for the second half of the concert.  The small pipes, or chamber pipes, are a smaller version of the familiar Scottish bagpipes for indoor use.  Jim and Dave will present surprising arrangements of Irish and Scottish tunes for this combination.
The original concert for Mar. 18 was postponed because the flute player, Beth Wasson, injured her hand and is unable to play.  The flute and harp concert will be included in the next season of “Made in Wyoming” Chamber Music series.
“Made in Wyoming” Chamber Music is a series that features Wyoming musicians and composers.  It is funded in part by the Wyoming Arts Council.  Next season will include Baroque music, as well as music composed by Wyoming composers.
Sort By Category By Month By Year
Cancel