"Fighting the Fires of Hate" exhibit comes to Jackson in January 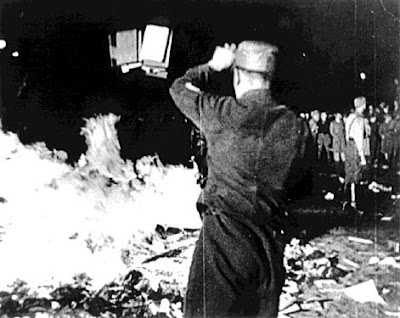 Nazis burning books in Berlin, May 1933. Photo from National Archives and Records Administration.

The winter/spring issue of Splash!, the magazine of the Art Association in the Center for the Arts in Jackson, has arrived in the wyomingarts mailbox. We always look forward to it, as it provides many postings for this blog, this one included.

The major arts and humanities in Jackson this season is entitled “Fighting the Fires of Hate: America and the Nazi Book Burnings.” It’s sponsored by the United States Holocaust Memorial Museum. The program launches Jan. 23, 2009, with the following events:

Jan. 23-March 4: Exhibition in the Center for the Arts Artspace Gallery, loaned by the Holocaust Museum. “Images of the Nazi book burnings continue to resonate in American political discourse and infuse literature, film and popular culture.”

Jan. 23-March 4: “Why Books Matter” exhibition in the Center Lobby. Co-sponsored by pARTners. This is a showcase of student work from projects focusing on book making and story writing.

Feb. 12, 7 p.m.: “Paper Clips,” film and lecture by Joe Fab in the Center for the Arts Theater. The film is “a moving and inspiring documentary that captures how one group of students responded to lessons about the Holocaust — with a promise to honor every lost soul by collecting one paper clip for each individual exterminated by the Nazis.” Sponsored by the Jackson Jewish Community and the Teton County School District.

Feb. 5, 7 p.m.: Guest speaker Mindy Weisel in the Ordway Theater of the Teton County Public Library. She is the only daughter of Auschwitz survivors and the first bay born in the Bergen-Belsen Displaced Persons Camp after World War II.

March 11, 7 p.m.: Presentation by Bob Behr, Holocaust survivor, in the Center for the Arts Theater.

For more information about any of these presentations, visit the JH Center for the Arts web site at http://www.jhcenterforthearts.org.