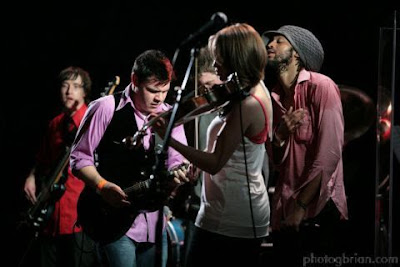 From Denver, Colo., the Flobots will perform a free concert Wednesday, April 28, at 8:30 p.m. in the University of Wyoming Union ballroom.

The group in 2007 went from an underground hip hop music group to an international phenomenon with their major label debut “Fighting with Tools.” The song “Handlebars” became a radio hit in 2008. The Flobots released their newest CD last month, “Survival Story.”

Air Dubai, an up-and-coming hip hop group out of Denver, will open the concert. The group takes hip hop to new places by blending genres, sounds and emotions to make heartfelt, believable music.

The show is sponsored by the Student Activities Council. For more information or for Individuals with disabilities needing accommodations, call the Campus Activities Center at (307) 766-6340.

Photo: The Flobots, an underground hip hop phenomenon, will perform a free concert Wednesday at 8:30 p.m. in the Wyoming Union ballroom.