Florence McEwin integrates "the real, the interpreted and the imagined" 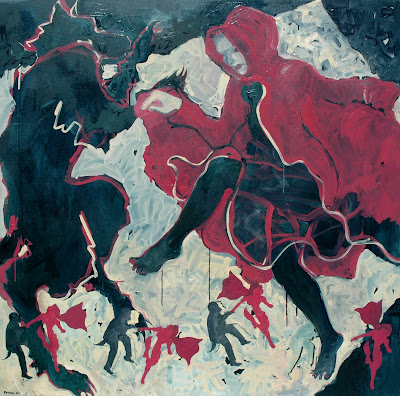 Green River resident and Western Wyoming College art professor Florence Alfano McEwin is one of the six Wyoming artists featured in the Wyoming Arts Ciouncil biennial fellowship exhibition No.v 5-Jan. 9 at the State Museum in Cheyenne. Florence writes about her work in her artist statement….

In my series, “The Adventures of Red Riding Hood,” I work to integrate the real, the interpreted and the imagined. The works are metaphors of life, re-imagining a child’s tale through reality and humor.

Since coming to life in the interpretation of artist Charles Perrault in 17th-century France, Red Riding Hood herself is a universal image within a morality tale. The wolf is an archetypal element laden with associations and imbued with analogous interpretations from all societies in today’s Wyoming – the wolf is a part of the wilderness in conflict with encroaching development.

Ever present within this tale is the male-female dichotomy considered with a playful twist of angst.

The intaglio prints are produced in variable editions of five to ten using chine colle and collage to embellish and provide an interpretive context that is much like an adjective to a noun, allowing each print to be interpreted slightly differently. The visual source of media images is often the film still, altered and manipulated suggesting another layer of tale.

In the two works in the “Dancing Partners” group, the paintings are playful in application and double entendre.