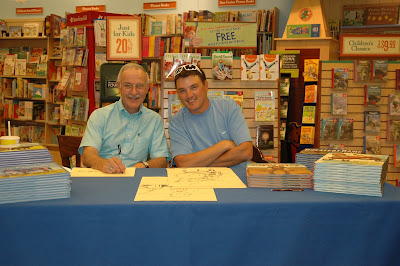 (l) Gene Gagliano and (r) Zak Pullen
Down at Barnes & Noble in Cheyenne today, Gene and Zak were quite busy signing books and talking to the crowd gathered around the book table about their creative process. Zak dashed off a few illustrations to pass the time between customers. Gene and Zak have recently collaborated on two children’s books. One is at the publisher as this is being written. Gene and Zak met at the Wyoming State Library convention a couple years back, and a friendship and professional relationship was born.

Gene is a Wyoming Arts Council roster artist, known by his many students as the teacher that danced on his desk. Gene’s many books include C is for Cowboy: A Wyoming Alphabet, Four Wheels West: A Wyoming Number Book, Inside the Clown, Falling Stars, and Secret of the Black Widow. Gene has two new books coming out very soon, in addition to the collaborative efforts with Zak.

Zak has had great success as an illustrator, and has begun to write the stories that he illustrates. His books include The Toughest Cowboy (2004), written by John Frank and illustrated by Zak. Zak has authored and illustrated The Greatest Game Ever Played (2006), and Friday My Radio Flyer Flew (2008). Zak also has a couple of new offerings on the way.