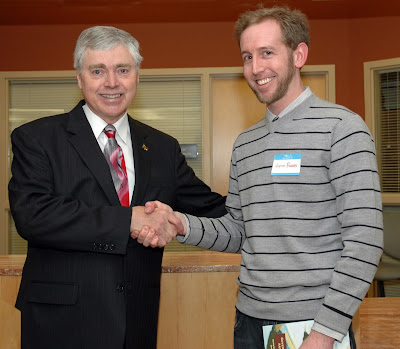 There were 133 applicants and nearly 400 entries for the 2010 Governor’s Capitol Art Exhibition. Juror Deborah Mitchell narrowed the selection down to 40. The Governor’s Capitol Exhibition Committee then selected the works of seven Wyoming artists for prizes totaling $13,400.

This year’s GCAE Purchase Awards were presented at a May 21 reception at the Wyoming State Museum:

As well, the Bobby Hathaway Juror’s Choice Award was given to Jon Madsen of Laramie for his oil painting titled “Foreshadower.”

The People’s Choice Award was given to Justin Richards of Cheyenne for his “Popixel Series Stool.”

Works not purchased during the reception are available for sale through June 5 either at the Wyoming State Museum or online at http://www.wyomuseum.org/.