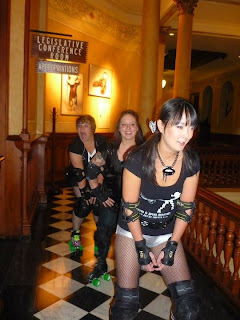 News from Wyoming filmmaker Harrison Sweeney:
Here are some pics (top of post and at the bottom) from Big Horn Samurai Sinema’s latest short film produced in 24 Hours for the Cheyenne Shootout this past weekend.  What you’re seeing are select members of the Naughty Pines Derby Dames inside the state capitol for the end credits of “Happy Z-Day,” which was shot with a cast of over 20 Wyomingites under a day in Cheyenne and Laramie. As per this festival’s regulations, the featurette was edited entirely in-camera.
BHSS will be showing its featurette, “Undead Lovers,” this Saturday, October 1st at the Atlas theatre during the Cheyenne Zombie Fest.  The  film is already hitting film festivals around the nation, starting with the Might & Fright Fest at the Long Beach Comic & Horror Con during Halloween.
Following Saturday’s screening, the next Wyoming exhibition of  “Undead Lovers” will be on Monday, October 24th at Metro Coffee in Casper.
The Executive Producer of BHSS graduated from Worland High School in 1996 and from the University of Wyoming in 2001.  After starring in and producing commericals, television, and film in Los Angeles for the past 7 years, (http://www.imdb.com/name/nm3151489/) he is aiming to base his production company in Wyoming to encourage filmmakers to bring outside money to the Cowboy State.
From the Casper Star-Tribune:
http://trib.com/lifestyles/home-and-garden/article_5e894a5e-eead-5bf5-871f-1d68cba09e00.html
From Ireland:
http://thegamingliberty.com/index.php/2011/08/04/help-reunite-the-cast-of-red-dead-redemptionn/
From Australia:
http://kotaku.com/5836817/red-dead-redemption-cast-members-reunite-for-a-live+action-horror-movie#
From Orlando:
http://www.blogtalkradio.com/theinvisibleworld/2011/08/25/the-invisible-world-ep-71 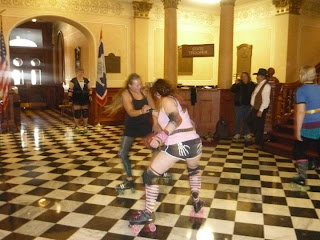