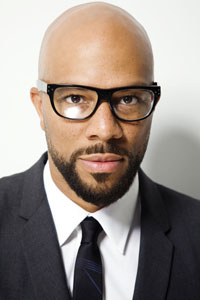 Hip hop artist and actor Common will be the keynote speaker at the 10th annual Martin Luther King Jr. March and Days of Dialogue (MLK/DOD) celebration Jan. 17-21, at the University of Wyoming.

Common’s speech, at 7 p.m. Tuesday, Jan. 18 in the Wyoming Union Ballroom, is free and open to the public. The speech is only one of the varied activities for the week-long celebration.

“When charged with planning the 10th celebration of the Martin Luther King Jr. Days of Dialogue and March, we as a committee, felt that it was important to discuss as many pieces to diversity as possible. We are covering many issues including race, sexual orientation, veterans and religion,” says Kate Steiner, MLK/DOD co-chair.

This year’s theme, “A Decade of Defining Diversity Through Dialogue,” recognizes and celebrates the 10 years of continuing emphasis on diversity through dialogue. UW community members honor the continuing impact of Dr. Martin Luther King Jr. and his life and ideals through this celebration. The week of activities serves as a renewal of UW’s commitment to making the campus and Wyoming a more welcoming and empowering place for people from different backgrounds, heritages, orientations or abilities, Steiner says.

He launched the Common Ground Foundation in 2007, which is dedicated to the empowerment and development of urban youth. In the children’s books he has written, the themes focus on utilizing the culture of hip hop to foster a better understanding of self respect and love. He also has begun a burgeoning acting career, staring in such films as Smokin’ Aces, Street Kings, American Gangster, Wanted, Terminator Salvation and Date Night.

Many other activities are scheduled throughout the week.

An annual march from the Albany County Courthouse to the Wyoming Union kicks off the events at 4 p.m. Monday, Jan. 17. The Dr. Willena Stanford Community Supper follows at 4:45 p.m.

Another highlight of the week will be the Cleo Parker Robinson Dance Ensemble performance at 8 p.m. Wednesday, Jan. 19, at the Laramie Plains Civic Center. The ensemble’s ideal is to honor diversity and inclusiveness through a vision of dance as the universal language of movement that turns the world into a sanctuary transcending boundaries of culture, class and age.

“Different After War” tackles the topic of how and why military veterans are different after war and how that impacts daily living. Retired Army National Guard Major D.C. Faber will discuss the issue from 1-3 p.m. Friday, Jan. 21, in the Wyoming Union Family Room.

Known for its confrontational style, Dead Prez will perform at 9 p.m. Friday, Jan. 21, in the Wyoming Union Ballroom.

Other activities include student service projects, panel and book discussions, a master dance class, a conversation with the actors in The Race Show and a program with the Beehive Collective. All events are free and open to the public except The Race Show, which requires the purchase of tickets, available at the door. Individuals with disabilities needing accommodations in order to participate should contact Steiner at (307) 766-3296.

For a complete list of activities, visit the Web site www.mlkdod.com .

Photo: Hip hop artist Common is the keynote speaker during the 10th anniversary of the Martin Luther King Jr. March and Days of Dialogue celebration Jan. 17-21, at the University of Wyoming.