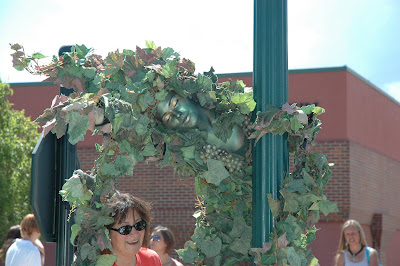 At the NIC Fest in Casper….

Concerts kicked off last night at the NIC Fest in downtown Casper with Wyoming favorites (and Wyoming Arts Council roster artists) Fireants from Johnson County. They performed some old stuff, some new stuff, and we listened, eating barbecue and sipping soda and/or beer (take your pick). The vendor fair was up and running, displaying artwork from 70-some artists from Wyoming, Colorado, Idaho, Utah, Oklahoma and others. I bought some hummingbird art from Pam Sharp out of Utah. So much great stuff… didn’t have time for it all.

But today was another day. First up on the Casper Star-Tribune stage was new WAC roster artist Bryan Ragsdale from Green River. He’s a song-writer and musician, playing mostly his own songs accompanied on guitar, with a few old faves thrown in, such as “Ghost Riders in the Sky” and the Marty Robbins tune, “Strawberry Roan.”

At 11 a.m., human plants in the form of “Vine to Vine” walked the streets. Uncanny, really, to see these two women on stilts, wrapped in fabric flora, stretching their extra-long legs along Casper’s sidewalks. They are giving six performances during the festival, according to Nicolaysen Art Museum Director Holly Turner. At one point, the two walking vines stretched their many legs and created arches for the kids to walk through. This was fun to watch, and I knew that these two performers must be sweltering as they worked swathed in flora under the June midday sun.

After another perusal of the art offerings, I viewed the incredible quilts in the NIC lobby (and voted for my favorite), grabbed lunch and was back to the CST stage for the Winters-Pfau Duo performing jazz by Ornette Coleman and some of their own compositions. The Pfau part of the combo is Tracy Pfau, music prof at Casper College and former WAC board member.

I’m in the computer center now at the Natrona County Public Library. A display in this lobby showed the architect’s rendering of the proposed new library. Looks impressive, almost as nice as the new library in Cheyenne. The proposed site is in the Yellowstone Historic District west of downtown and along the Platte River. Probably a bit too far from downtown, but former mayor Guy Padgett told me last night that it will be a 15-minute walk from the city center. That’s fine for us walkers, but what about the elderly and disabled? A stop on the bus route is proposed.

But back to the music. WAC roster artist Jeff Troxel performs next. There’s still another afternoon and evening today (Jalan Crossland on stage tonight), and another day tomorrow for NIC Fest. Don’t miss it!

PHOTO: One of the “Vine to Vine” performers wraps herself around a light pole above Nicolaysen Art Museum Director Holly Turner. Photo by Linda Coatney.