Inda Eaton live in Casper May 16 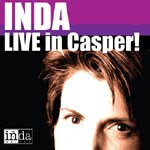 Here’s info on Inda from the ARTCORE web site:
Inda Eaton is an accomplished singer songwriter/band leader with a knack for creating crafty hooks, meaningful lyrics and killer harmonies that have won her a loyal fan base worldwide. Her live shows have made her a staple at Rock & Roll Marathons and festivals like the Tempe Music Fest and Gateway’s Saturday in the Park. Inda and her grassroots band have opened for names like John Hiatt, Blues Traveler, Earl Scruggs, Hootie and the Blowfish, LeAnn Rimes, Shemekia Copeland, and Molly Hatchet.
This girl-with-a-guitar story began in Arizona as a Momma-wants-her-baby-to-be-a-classicalpianist story. As a student at Boston University, playing the coffeehouses and college stairwells proved difficult with a piano so the broadcast journalism major permanently opted for her more portable guitar. She traveled the globe and landed in Germany where she served the U.S. military—drinks, that is. On her way stateside to pour herself into a music career, she contracted cerebral malaria on a trek through Africa.
While recuperating in Wyoming, Inda met bluesman Spencer Bohren, Producer of her debut CD, thin fine line. Two years later, her second vocal album, Never Too Late to Fly, was co-produced with Bohren in New Orleans. The LP, found a home on CMJ and alternative charts. Hits like “Hey Lie” and “Woman in Me,” garnered critical acclaim in both the folk and rock world and earned an AFIM nomination for Best Independent Album of 1998.
The album prompted 5 tours, including 2 with MWR for the US military communities and schools overseas. Stateside shows grew to support the CAPP Fund, Toys for Tots, Habitat for Humanity and Rosie’s House. In 2000, Inda and her band landed in Phoenix, Arizona, to record her fourth album, Why the Desert, which aligned her with tours in support of American Society of Young Musicians and VH1’s Save the Music Program. In 2004, Inda released Indeep, a five-song EP and in 2005 she released Inda Live from Bear Trap, available on www.indaeaton.com. INDA Live in Casper! is her 7th independently produced album.
Sort By Category By Month By Year
Cancel