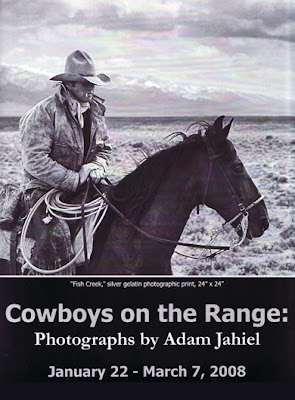 A series of black and white silver gelatin photographic prints of working cowboys are featured in the exhibit, “Cowboys on the Range: Photographs by Adam Jahiel,” at the Wyoming State Museum from January 22 through March 7.
The public is invited to a talk by Jahiel from 4-5 p.m. on February 21. A reception will follow the talk from 5-7 p.m.

For more than a decade, Jahiel has packed his tent, saddle, stove, lantern and cameras and headed west to his regular circuit of Great Basin ranches.
Once there, he spends several weeks shadowing roundups and photographing. These cowboys don’t carry much and don’t own much, making for a simple existence in the isolated, lonely big-sky of the Great Basin. This area is one of the most inhospitable and sparsely inhabited areas of the United States. The Basin covers most of Nevada, over half of Utah and parts of California, Idaho, Oregon and Wyoming.

Jahiel, a two-time recipient of the Arts Council’s Visual Arts Fellowship Award, has been a resident of Story for more than 15 years. His work has been featured in “Lens Work,” “Photo Insider,” “Camera Darkroom” and “Southwest Art” magazines.
His photographs have been featured in exhibitions at the Nevada Museum of Art, the John Michael Kohler Arts Center, the Joslyn Art Museum, the Yellowstone Art Museum, the Buffalo Bill Historical Center and the National Museum of Wildlife Art.