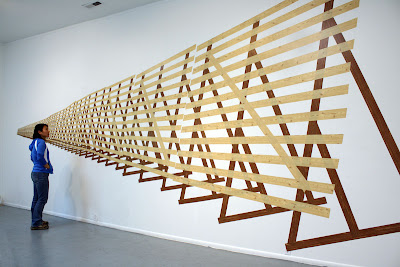 Cheyenne artist (and 2009 Wyoming Arts Council intern) Ji Eun Kim is at the Jentel Artist Residency Program through June 13. She is at work on mural-size depictions of snow fences. She installed one of these during her spring residency in Nebraska City, Neb (shown in photo above). She is looking for a place to install a similar one in a Cheyenne storefront. The piece is 11 feet high and 24 feet long. If you know of a spot, contact Ji Eun through her blog at http://jieunkim25.blogspot.com/

Ji Eun will be one of the artists featured at “Jentel Presents” this evening (June 1), 5:30-7 p.m. at the Sheridan County Fulmer Public Library. Other presenters include Tom Sleigh (poet), Blas Falconer (poet), Ken Kelly (visual artist), Anne McCauley (visual artist) and Christine Gray (visual artist). The event is free and open to the public. 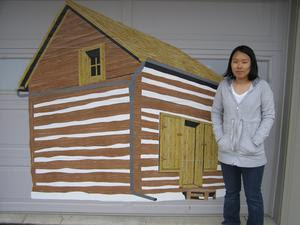 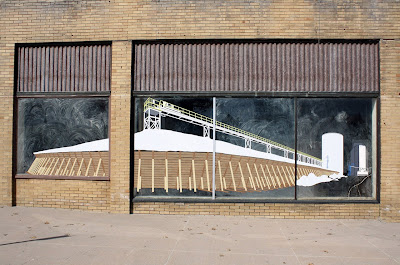 During her Nebraska residency at the Kimball Harding Nelson Center for the Arts, she was featured in the local paper. Here’s the article:

Some of Nebraska City’s most familiar structures provided inspiration for artist Ji Eun Kim as she completed her residency at the Kimmel Harding Nelson Center for the Arts. Kim created giant renderings of both the Mayhew Cabin and the grain storage at DeBruce during her four-week stay which ended March 26.

“I love old structures,” Kim said. The Mayhew Cabin piece was created at the art center, while the mural depicting the grain storage appears on a storefront window across from the Courthouse to the north. Contact paper was applied to create the illustrations.

Kim, a painter and visual artist who was born in Seoul, South Korea, said she didn’t know anything about the Mayhew Cabin before she came to Nebraska City, but once she learned about its significance, she found parallels between the slaves escaping on the Underground Railroad in the 1850s and the North Korean refugees of today.

“When I see something, I automatically think of my own country and its history,” she said.
While at KHN, Kim created a large map of the route the slaves took, as well as a 3-dimensional map representing the travels of the North Korean refugees.

Kim met with Mayhew Cabin Director Bill Hayes as part of her research for the project.

“It is incredible to see how an artist can transform raw material into a piece of art, and that one of those things was inspired by a visit to the Mayhew Cabin,” Hayes said. “It is great to see an artist inspired by a simple log cabin. The very simple structure tells a very important story of how people escaped from slavery. People are still trying to escape injustice and oppression, like the refugees.”

As for the grain storage, Kim said she was initially fascinated by the structural aspect. “I just fell in love with the structure,” she said. “I was amazed by it.”

She said it’s also a “landmark” in Nebraska City that represents the local economy.

Kim has completed other residencies in small communities and enjoys making art from the structures that symbolize daily life in the area where she stays While in Vermont, for example, Kim created a piece based on a covered bridge.

“I want to take advantage of living in a rural place,” she said. “I’m inspired by the local area.”

Kim hopes the residents of Nebraska City will think more about the meaning behind the structures that have been fixtures in the town for many years.

“I want to get people here to see with fresh vision,” she said.