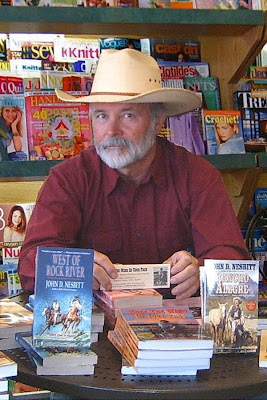 Western writer John D. Nesbitt will read from his work on Friday, February 19. The event will take place at Western Wyoming Community College in Rock Springs in Room 1302 at 7 p.m. It is free and open to the public.

Nesbitt lives in the plains country of Wyoming, where he teaches English and Spanish at Eastern Wyoming College. He has had more than twenty books published, including short story collections, contemporary novels, and traditional westerns, as well as textbooks for his courses.

His most recent work consists of “Dead for the Last Time,” a novella; “Poacher’s Moon,” a contemporary novel; and “Not a Rustler,” a traditional western.

Nesbitt has won many awards for his work, including two awards from the Wyoming State Historical Society (for fiction), two awards from Wyoming Writers for encouragement of other writers and service to the organization, two Wyoming Arts Council literary fellowships (one for fiction, one for non- fiction), a Western Writers of America Spur finalist award for mass-market paperback original novel for “Raven Springs,” and the Spur award itself for his novel “Trouble at the Redstone.”

The event is made possible by the support of the Arlene and Louise Wesswick Foundation and the Wyoming Arts Council. It is the second in a series of readings planned for the spring, which will also include essayist Peter Anderson from Crestone, Colorado on March 5; and fiction writer Vicki Lindner, formerly of Laramie and now from Denver, on March 26.

These writers will also be offering workshops prior to their readings, in which they facilitate writing exercises, share writing experiences and tips, and answer student-generated questions. Nesbitt’s workshop is scheduled from 2-5 p.m. on Friday, Feb. 19, in Room 1408.