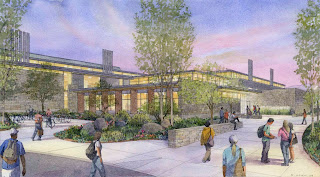 Pres. Buchanan was associate dean for Arts and Sciences “years ago” when he first heard about the project from former Visual Arts Department Chair Mary Jane Edwards. He called her “one of the early catalysts” for the building. Mary Jane traveled to the event from her job at the Jentel Artists Residency Program. Her boss, Neltje, also attended, and was introduced as “a special guest” by Buchanan. Neltje also funds the Wyoming Arts Council’s Blanchan/Doubleday writing awards.

The new building will replace the old arts building, built in 1972. Buchanan noted that the department outgrew its space in a few years. “It was a state-of-the-arts facility in 1972,” he said. “But the arts deserve better.”

The arts department is scattered throughout several campus buildings. Some offices and classrooms are located in old married student housing and some in Ag B, known to old hands on campus as “Old Meats.” It’s where ag students once studied and dissected animal carcasses. It was also mentioned in author Jane Smiley’s novel, “Moo.”

Gov. Freudenthal joked that the arts building had not been the highest-rated project on the university’s very-long construction list. “But I knew that Tom Buchanan would not be happy until it was built,” he added.

Sometimes known as “the arts governor,” Gov Dave went on to mention that he recently toured the Air Force Academy in Colorado Springs and had lunch with cadets from Wyoming. He was impressed with the Academy’s emphasis on the arts. “The Air Force is making well-rounded military and civic leaders,” he said, noting that well-rounded citizens also is a goal in UW’s emphasis on arts and arts education.

Jim Neiman said that the visual arts building is part of the university’s long-range plan. He and the other board of trustees members are proud of the fact that it’s a LEED-certified building. “Our target is to make it a net-zero energy building,” he said. (For more about the environmental-friendly aspects of the building, go to http://www.uwyo.edu/news/showrelease.asp?id=44583.)

When the speeches were over, President Buchanan and staff handed shovels to Gov Dave, Sen. Barrasso and other dignitaries. The shovels had been turned into works of art by UW Visual Arts students. One, wielded by Jim Nieman, had a 20-foot-long handle. Another was decorated as an upside-down, head-in-the-sand ostrich. One was transformed with tape and paint and hoses into an odd-looking contraption. “I could operate with this,” quipped Sen. (and physician) Barrasso.

Each shoveler received a hardhat (it was a construction site) topped with a cowboy hat (this is Wyoming). Ground was broken, dust swirled in the morning breeze, and refreshments were served.