Mammoth good time had by all at book festival 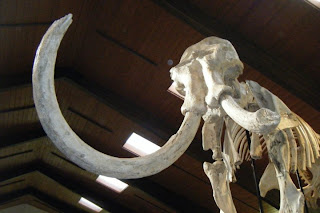 Saturday began with Australian Aboriginal creation stories, and then moved to Hawaiian shark mythology. In the afternoon, Wyoming’s 11,000-year-old mammoth was stomping through the Tate Geological Museum and prehistoric armored Hell Pigs were hot on my imaginary trail.

Wish all Saturdays could be as exciting.

But that was bookfest Saturday in Casper. The Casper College/ARTCORE Equality State Book Festival is an extravaganza of books and writers and myths and legends and poetry and fun.

In the interest of full disclosure, I must admit that I’ve been on the bookfest planning committee since its inception six years ago. This makes me slightly biased, yet still wildly enthusiastic.

John Vernon is an historical novelist from New York who justy spent years exploring a topic that’s maybe even more mythic than dinosaurs — Billy the Kid. Vernon’s latest is “Lucky Billy.” He read some passages Friday evening and then talked about research on Saturday.

While he agrees with the old saw “write what you know,” Vernon likes to add this: “know more.” That’s where research comes in. He usually starts each book with a trip to the setting. In “The Last Canyon,” that was the Green River in Wyoming. For “Lucky Billy,” he traveled to Lincoln, N.M., which hasn’t changed much in the past 120 years. He then explores the “material culture” of the period. He had to learn volumes about firearms of the 1880s. He read a two-page section heavy with gun lore. He had to be careful not to be a “show off” with all this newfound knowledge.

“You should be subtle with your research,” he said. “It should be delivered in passing.”

Because his books are heavy on dialogue, Vernon researches slang of the era. Old newspapers, letters and diaries and books are great for this.

“You’re building a scaffolding of facts,” he said. “But in the end, nothing is possible in a novel without imagination.”

And no book festival is possible without imagination. Scaffolding, too.