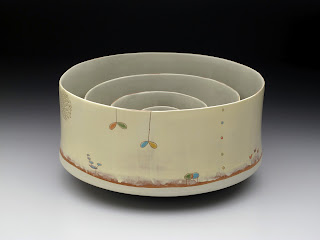 This summer, Margo’s Pottery and Fine Crafts in Buffalo is featuring the terra cotta pottery of Helena, Montana, artist Courtney Murphy. Murphy began working with clay when she lived in Brooklyn, New York. She spent several years working for potters in the city, and then decided to get a degree in ceramics, so went across the country to Portland, Oregon where she attended the Oregon School of Art and Crafts. After receiving the degree, she spent three and a half months doing a working residency in Denmark. “The clean influence of Danish design is obvious in her work, along with her own playful sensibility,” says Margo Brown, who is hosting the show. Her designs are influenced by simplified abstractions of nature, children’s artwork, folk art and mid-century modern forms and shapes. All of her work is functional, and on some of the pieces, she makes a rounded base, so that the pieces can be in motion even while working to serve food. This is one way the playful nature of her work becomes part of our lives.

Last May, Courtney Murphy, was featured in the magazine Ceramics Monthly, and also her work was shown in the article on the Archie Bray Foundation that appeared in American Craft. Along with her show at Margo’s Pottery and Fine Crafts, Courtney will have pieces in the Covet-Teapots show in the famed Ferrin Gallery in Pittsfield Massachusetts. Also in 2012, her work has and will be shown in galleries in Iowa, Missouri, Texas, New Hampshire, Indiana and Washington. And in 2011, she was in fifteen shows across the US. She is currently in Red Lodge, Montana, doing a residency at the Red Lodge Clay Center.

“I enjoy the process of scratching into the clay to draw my images. Because of this process, each piece created is unique, and there is a slight variation in each drawing. I am compelled by the variation found in handmade objects; a slight change in the profile or image on a cup decides whether a person will be drawn to one cup over another. I also like to create functional work because these handmade objects leave my studio to become a part of somebody else’s daily routine. I am interested in the personal connection that handmade objects help to create,” says Courtney Murphy.