Nanda in Fort Collins for fundraiser 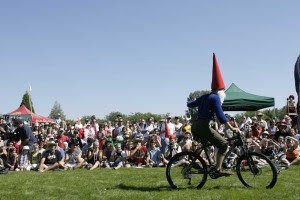 Nanda, a group composed of four young men from Port Townsend, Washington, is touring as part of Tour de Fat this year. They are performing in Fort Collins on the 7th for free at Tour de Fat, which is New Belgium’s effort to get people riding bikes instead of driving. There’s a bike parade and then performances, including Nanda. They are part of the “Revival,” which takes place from 11-4. It is free–and all proceeds from beer sales go to two bicycle groups. It takes place at New Belguim, 500 Linden. Nanda does physical comedy–action and humor mixed, including acrobatics, dance and kung-fu fighting and they are hilarious. At a performance this summer, it was packed full of adults and kids, all having a wonderful time. They are very popular in
Portland/Seattle, where they are based.

You can learn more about Tour de Fat at www.tour-de-fat.com or www.followyourfolly.com
The sites are a lot of fun, if a tad short on information.
Sort By Category By Month By Year
Cancel