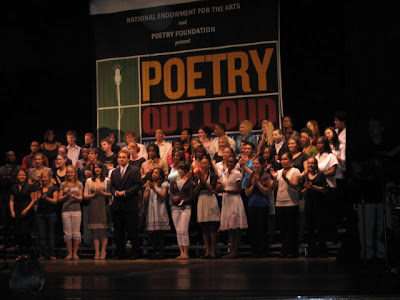 The competition was fierce.

Fifty-two revved-up high school kids from fifty states, the District of Columbia, and the Virgin Islands came to Washington, D.C., April 28-29 to compete in the national finals for Poetry Out Loud.

Caila Booth, a senior at Buffalo High School, represented Wyoming. She traveled to D.C. with her mom, Kelly. Her dad would have come too, but he had an emergency appendectomy two days before departure.

I attended to see the finals in person, and to meet with my Poetry Out Loud colleagues from other arts agencies. I learned a few things that can help Wyoming boost its participation in a program that can be as vital in the schools as language arts, drama or speech and debate.

The semifinals were held all day on a soggy Monday, April 28, at Lisner Auditorium on the George Washington University campus. The morning semifinal featured representatives from states in the Northeast and mid-Atlantic region, plus D.C. and the Virgin islands. At 1 p.m., contestants from the South and Midwest took the stage. Western and Great Plains states competed in the evening.

I watched presentations by every student in all three regions. Each one recited two poems, which were scored by the judges, who then selected their top eight. Those eight each recited one more poem. Those scores were added to the previous ones to get the four who advanced to the finals.

I was impressed by the calibre of their recitals. I was seated next to Victor Akosile’s teacher from McKinley Technology High School in D.C. She told me that Victor grew up with a stutter and he stutters still — until he goes up on stage. He performed “Famous” by Naomi Shihab Nye and “Calmly We Walk Through This April’s Day” by Delmore Schwartz. Great presentations, but he didn’t make it to the finals.

Alison Strong did. She’s from New Jersey. She performed the very popular — and difficult — “Fever 103” by Sylvia Plath. According to a story the next day in USA Today, Strong was puzzled by the complicated poem and didn’t know how to approach it until she found a video of Plath herself reading the poem. Tip for students participating in future POL contests: watch the video, if it’s available. Not real helpful for John Donne and Emily Dickinson, but most 20th century poets are at least available in audio. Strong also recited “A Supermarket in California,” a funny Allen Ginsberg poem where he imagines Walt Whitman and Federico Garcia Lorca loitering in a post-war American grocery store.

Other memorable recitations came from Shawntay A. Henry of the Virgin Islands with “Beauty” by Tony Hoagland, Carolyn Rose Garcia of West Virginia with “Poem with One Fact” by Donald Hall,” and Gabrielle Guarracino and “Unknown Girl at the Maternity Ward” by Anne Sexton. Sexton, Sharon Olds, and Sylvia Plath were probably the most popular poets at the national finals.

In this region, Strong, Henry, Garcia and Guarracino all advanced to the finals.

Finally, at 5 p.m., we reached the semifinals for the third region, which included most of the states in the western half of the country. You’d think that tension had built all day for Caila, but she didn’t show it, looking cool and calm on stage during the sound check. Not only was this region the last to compete but Wyoming — as usual — was the last up because the competitors were arranged alphabetically by state. Caila followed a fine presentation of Billy Collins’ “Forgetfulness” by BreAnna Jones of Yakima, Wash. Caila’s first poem was “Fever 103” by Sylvia Plath. She did a great job. Her second-round poem was “America” by Claude McKay, not nearly as well-known but powerful when recited by Caila.

Alas, Caila didn’t make the cut for the next round. But eight of her competitors did. And that list was narrowed to four after the third recitation by each student. They were BreAnna Jones, Elsa Vande Vegte of South Dakota, Sophia Elena Soberon of Oregon and Madison Niermeyer of Utah. As we moved into the National Finals on Tuesday, you could see that the third region might have been the toughest. The overall second-place finisher was Soberon of Oregon and the third prize in the Tuesday night finals was awarded to Madison Niermeyer of Utah.

Who won first prize? Shawntay A. Henry of the U.S. Virgin Islands. This is the first time that the Virgin Islands had competed in the Poetry Out Loud National Finals. A huge cheer went up when the winner was announced at about 10 p.m. on April 29. Seems as if the islands’ entire population had traveled to D.C. for the event.

While in D.C., I talked to POL organizers from many states. They told me that the competition gets tougher each year, and that most of the state finalists utilize coaches to sharpen their skills. Wyoming will have to do that in the future, as it obviously makes a big difference. I also garnered a few other tips about improving the Wyoming POL program. If you’ve competed in this poetry recitation contest, we welcome your comments via e-mail or by phone at 307-777-7742.

One other thing. At the POL luncheon on Tuesday at the Dirksen Senate Office Building, both of Wyoming’s senators showed up to congratulate Caila. Sen. Enzi was one of the first to appear, posing for photos and chatting with Caila before he headed back to work. Sen. John Barrasso came a half hour later, following a speech on the floor of the Senate. Many pictures were taken by the NEA photographer, and we will feature those in upcoming blog posts.

–Mike Shay
Sort By Category By Month By Year
Cancel