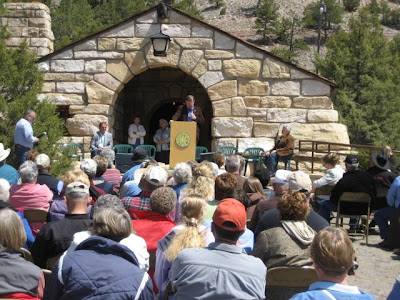 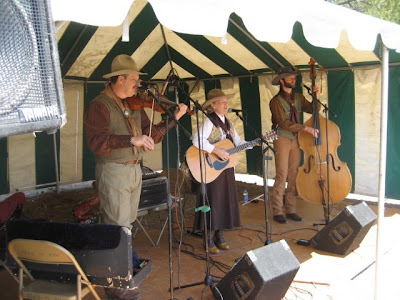 More than 250 people attended the 75th anniversary celebration of the New Deal on Saturday, May 3, at Guernsey State Park.
All of us were thankful that the ceremony was held Saturday under sunny skies and not on Friday, when 60 m.p.h. wind gusts pushed snow through the canyon, shutting down county roads. The wind had been so fierce that the umbrella tent set up for the band was lifted from its moorings and slammed into a tree. It took park service guys all day to get it down and find replacements for the poles bent in the storm.
Saturday’s audience sat in folding chairs, munched homemade cookies and sipped lemonade while Prickly Pair of Dubois (shown above) serenaded them with songs from the 1930s. Others toured the park museum, an historic rock building constructed in 1936 by the New Deal’s Civilian Conservation Corps. During the New Deal, Guernsey was home to two CCC camps. It was also one of the few camps in the U.S. that was allowed to use skilled labor, which contributed to the multitude of structures in the park that not only look good but are intact 75 years after their construction. That includes the displays inside the museum, as well as its sturdy exterior.
Wyoming State Parks and Cultural Resources Director Milward Simpson opened the ceremonies. The flag ceremony was conducted by the Wyoming Youth Challenge Color Guard. They posted flags representing the U.S., Wyoming, and the CCC, the same type of flag that flew here in 1936.
Next at the podium was Gov. Dave Freudenthal (shown above in front of museum). He said that he had a fondness for the museum, as the rock for its floor was quarried in his hometown of Thermopolis. His parents grew up prior to the Great Depression and were married right out of high school on March 6, 1929. The Depression began on Oct. 29, 1929, with the “Black Friday” stock market crash. Gov. Freudenthal’s father would tell his eight children that the president thought that “the day that I married your mother was so important, he closed the banks.”
That sort of humor was indicative of the can-do spirit that prompted President Franklin D. Roosevelt to launch the CCC as one of the first acts of his administration once he took office in 1933. Dr. David Kathka of Rock Springs followed the Governor and talked about the New Deal’s history. There were eventually 19 CCC camps in Wyoming, each containing about 200 men. The two at Guernsey competed against one another and planted trees and built roads and trails. They built the museum, picnic shelters and the Million Dollar Biffy, one of the most elaborate and well-constructed outdoor restroom facilities in the country.
Dr. Kathka noted that the CCC workers woke up early to the bugle’s call and labored most of the day. Each camp was run as if it was a military camp which also served as preparation for the world war that was on the horizon. But the men — most of them in their twenties — also played hard, especially at the park’s summer water carnival. Photos of camp activities were on display in the museum.
Michael Pettigrew, the mayor of the town of Guernsey, also spoke. Todd Thibodeau from Wyoming State Parks talked about the camp’s history. Not widely known, he said, is that Guernsey was the first collaboration between the CCC, Bureau of Reclamation (which built the reservoir dam) and the U.S. Forest Service to create the prototype of a public recreation area. It served as a model to build other recreation facilities at Bureau of Reclamation reservoirs across the U.S., especially in the West.
After the ceremony, there was more time for cookies and music. The event was funded by a grant from the Wyoming Arts Council via a grant from the NEA’s American Masterpieces program. Prickly Pair is featured on the WAC’s artist roster. Les Hamilton, one of the group’s three members, grew up in the Big Horn Basin where his father worked for the CCC in the 1930s. The day’s events concluded with guided tours provided by park personnel.
For a profile of Orman Millikin, the local rancher who, as a young man, worked with the CCC at Camp Guernsey and was honored by the Governor at Saturday’s ceremony, go to http://www.trib.com/articles/2008/05/04/news/wyoming/doc481bd3f5289f0815347652.txt
Sort By Category By Month By Year
Cancel