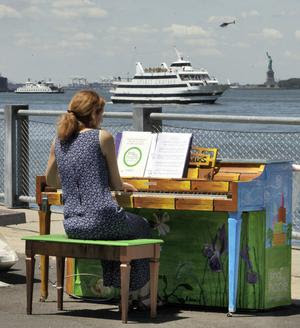 Carolyn Enger, from Englewood, N.J., plays a piano in Brooklyn Bridge Park in the Brooklyn borough of New York, Monday. The piano, one of 60, is part of an art installation touring the world that makes its first U.S. stop in New York. The concept has put more than 130 pianos in parks, squares and bus stations in cities from London to Sydney, Australia.

In the Casper Star-Trib today, an article on page A14 talks about the public art project in New York City that has placed 60 pianos around the city at landmarks and parks for anyone to sit down and plunk out tunes such as Bach’s “Minuet in G” to Elton John’s “Rocket Man.”

In bustling Times Square, on a traffic triangle in the East Village and at a park with the Statue of Liberty in the background, players flocked to the pianos Monday as audiences applauded from taxicabs and sidewalks.

“This is the first time I’ve ever touched a piano,” said Lynette Morris, a 52-year-old hospital maintenance worker from the Bronx. She had just sat down at one of the instruments in the East Village, situated at the top of a flight of subway stairs. “I can’t play but I’m going to try,” Morris said.

Moments later, as construction trucks beeped and traffic roared by, a more experienced player got his chance on the bench. New Yorkers, who don’t stop for much, halted in their tracks to listen as he ran through classics like Scott Joplin’s “The Entertainer” and Vince Guaraldi’s “Linus and Lucy,” otherwise known as the “Peanuts” theme.

The two-week project, devised by British artist Luke Jerram, is making its first U.S. stop in New York. The instruments are open for public play from 9 a.m. to 10 p.m. in most locations. Each has a tarp in case of rain, and has its own caretaker to unlock the keyboard each morning.

During his final number, “Let It Be” by The Beatles, a guy manning a nearby coffee cart stuck his head out and belted out part of the chorus.

“It’s amazing how a piano, in the middle of the total urban chaos, will make everyone stop to hear the notes,” said Dana Mozie, who was visiting from Washington, D.C.