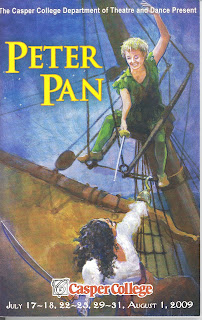 On my trip to Casper last week, I was able to get to the Saturday performance of Casper College’s production of Peter Pan in the recently flooded Gertrude Krampert Theatre. There was no visible evidence of that circumstance, but the performance began a few minutes late due to some last minute technical difficulties. I did hear that Friday’s opening night performance had to be cancelled because of a power outage that was caused by a bus running into a power pole on 2nd Street, but I haven’t been able to confirm that. At any rate, the play was first rate, and is the case with Casper College productions. It was wonderful, in that intimate setting, to see Peter Pan come off a the window ledge and fly across the stage out above the audience.

Tom Empey directed this production and in the program talks about seeing the movie Finding Neverland in 2004 as inspiring him to once again (they had done Peter Pan in 1995) do Peter Pan. He loved the acting, the emotions and most of all the look and feel of the movie, particularly in the scenes from Peter Pan. He wanted to try and create that look and feel with this production. He also notes that in 2004, he was privileged to see the play in The Duke of York’s Theatre in London, where Peter Pan was first staged in 1904.

Micheal Stedillie, drama instructor at Kelly Walsh High School for that last 20 years, played Mr. Darling and Captain Hook, and was both humorously a clueless father and inept villian. Faith Engen played Peter Pan and she was engaging as the the boy who never wants to grow up. A college student now, Faith was a student of Stedillie’s in high school.

There were 38 performers, and most had elaborate costumes, which were inventive and terrific. As to be expected, there were many children of all ages in the audience who laughed and booed and gasped. When Peter asks the audience to clap if they believed in fairies, so Tink’s fading life would light back up, there was a vigorous response.