Rattlesnake Jake doesn’t live up to his name! 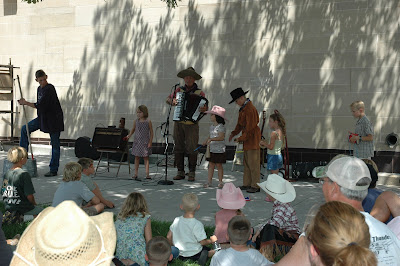 Outside at the Wyoming State Museum, Rattlesnake Jake set up his amplifier and microphone in the shade of a cottonwood, and began entertaining the semi-circle of visitors who had made this one of their stops in Cheyenne during Frontier Days. People even took off their shoes and nestled their toes in the semi-cool green grass; “Really feels good,” the woman from South Dakota grinned. It was a 90-degree day, after all. Jake regaled his audience with such crowd-pleasers as “You Are My Sunshine,” to which he encouraged everyone to sing along while he accompanied, and in between songs, enlightened the crowd with bits of western wisdom and lighthearted jokes. For instance, did you know a mule can see all four of its legs, while a horse cannot? For his rendition of “Stairway to Heaven Polka,” he brought up several children to play a variety of instruments. Ethan from Denver did a rock star job on the washtub, single string bass, while Ethan on the other end, from Cheyenne, definitely had a bit of beatnik rhythm on the bongo drum. Jake thought the little girl in the pink hat had a classical bent to playing the mini cymbals.

You can catch more of Rattlesnake Jake down at The Historic Plains Hotel every night from 5 to 7:30 pm during Frontier Days. He’s a delight!
Sort By Category By Month By Year
Cancel