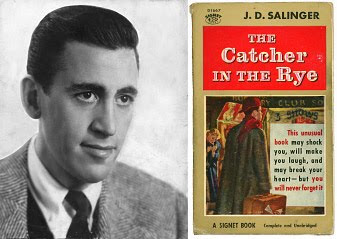 Salinger didn’t publish much. But with him it was quality, not quantity. He wrote one of the best-selling novels of all time, “Catcher in the Rye,” also one of the most-banned books in U.S. schools.

He also wrote one of the best American short story collections, “Nine Stories.” As a young short story writer, I read each one of these over and over in an attempt to absorb their magic.

Here’s what New York Times writer Charles McGrath had to say on the subject (images above also from NYT):

The stories were remarkable for their sharp social observation, their pitch-perfect dialogue (Mr. Salinger, who used italics almost as a form of musical notation, was a master not of literary speech but of speech as people actually spoke it), and for the way they demolished whatever was left of the traditional architecture of the short story — the old structure of beginning, middle, end — in favor of an architecture of emotion, in which a story could turn on a tiny alteration of mood or irony. Mr. Updike said he admired “that open-ended Zen quality they have, the way they don’t snap shut.”

–Mike Shay
Sort By Category By Month By Year
Cancel