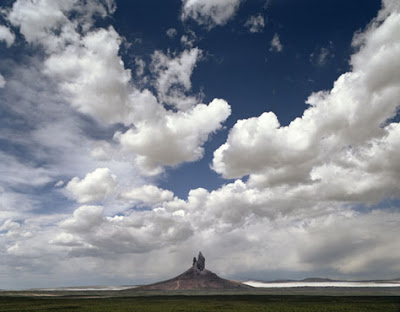 I attended the sessions today at the Red Desert Symposium at the UW Art Museum in Laramie. Photographer Marty Stupich started the day with some background on the 57 photos displayed in the museum’s main gallery. One of them — a distant shot of Boar’s Thumb under a big sky — is featured on the conference’s poster (see above). This was followed by a panel discussion of the people behind the book “Red Desert,” due for a 2008 release by the University of Texas Press. The project was edited by Annie Proulx of Saratoga, who also wrote and researched some of the text. Stupich’s photos add visual pizzazz to the book. Other panelists were anthropologist Dudley Gardner and geologist Charles Ferguson.

Proulx became interested in the Red Desert when Stupich asked her to write the intro to his book of photos. She set off for the Coe Library at UW, figuring she’d grab a sack of books on the subject, read them, and write her intro. But she found not a single book on the Red Desert. At the UW Heritage Center, she found an old volume on the region’s botany — but that was it. The lack of publications spurred her to consult Dudley Gardner and they talked to other researchers and scientists. “It just grew after that,” she said.

In the afternoon, UW entymologist and grasshopper expert (and WAC creative writing fellowship winner) Jeff Lockwood talked about the amazing amount and diversity of bugs he found during a Red Desert survey. He compared its biological richness similar to that of the Amazon River Basin in South America.

Lockwood was one of 14 presenters who had been sent to the Red Desert by conference organizers with the charge that they return with a 20-minute presentation. None knew what the other would present. Frieda Knobloch composed an essay on her travels and read it to the crowd. Anthropologist Robert Kelly read an imaginative essay, cued to a Powerpoint show, about the arrival of the first people to Wyoming in “Who First Saw the Red Desert?”

More sessions tomorrow (Sept. 29) at the Art Museum. Laramie’s Linda Lillegraven will talk about her paintings about the desert. Bryce Reece of the Wyoming Wool Growers Association will speak about the history of the sheep industry in the Red Desert.

The Red Desert is 6,000 square miles of Wyoming. It’s made up of thousands of species and scores of natural wonders. It also has — at last count — more than 15,000 oil and gas wells. The threats are clear, but the first step is gaining some information on this little-known place in the state.