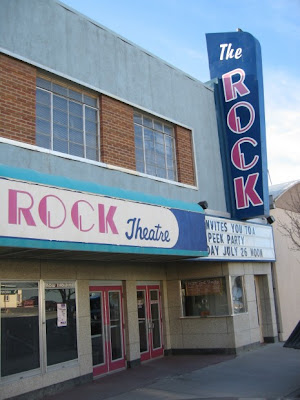 The abandoned Rock Theatre (once the West Theatre) in downtown Rock Springs is being rehabilitated. Here’s an excerpt from a story about the project from Casper Star-Tribune reporter Jeff Gearino:

A little bit of that local history is being saved under an ongoing, approximately $2.1 million revitalization project by the city’s Urban Renewal Agency/Main Street program. The project aims to renovate the old venue for use as a theater and performing arts facility.

“We want to rehabilitate the building, put it to public use and access, and hopefully it can become a kind of new catalyst for people and give them a reason and a purpose to come downtown,” Mueller says.

The facility will serve as a community gathering place, Mueller says, and will accommodate movies, theatrical and cultural performances, youth-oriented and other activities.

Earlier this year, the agency received a $1.5 million community facility grant from the State Loan and Investment Board to help fund the project. Donations, smaller grants and city funds are footing the rest of the project.

Mueller says the agency expects to review architectural drawings around June 15 and begin bidding the construction phase soon after.

Construction is expected to begin in September or October, with an eye toward completing renovations by summer 2011.

She said a “peek party” is planned for June 19 to allow residents one last look at the old theater before construction begins.