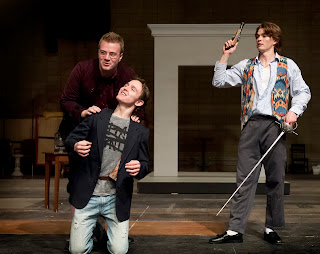 From a UW press release:
The University of Wyoming Department of Theatre and Dance’s spring season opens with “The Beaux’ Stratagem” at 7:30 p.m. Feb. 7-11 on the Fine Arts main stage.
Tickets cost $14 for the public, $11 for senior citizens and $7 for students. For tickets and information, call (307) 766-6666 or go online at www.uwyo.edu/finearts .
Directed by John O’Hagan, “The Beaux’ Stratagem” is George Farquhar’s tale of two insolvent rakes who to try to marry into money to replenish their coffers.
A late Restoration classic with a surprisingly moral compass, “The Beaux’ Stratagem” was first produced at the Haymarket Theatre in London in 1707, and was one of the most frequently performed English comedies for more than a century.
“The beautiful thing about this play is how it bridges two eras so wonderfully by retaining elements of the more raucous Restoration comedies,” says O’Hagan. “We’re taking a light-hearted approach to this piece, making it really frothy and fun.”
The story centers on aristocratic rakes Tom Aimwell and Jack Archer, who have nearly exhausted their limited inheritances on drink and gambling. With a mere 200 pounds left between them, they leave the high life in London for the countryside in hopes of marrying rich and repairing their fortunes. Posing as master and servant, they roam about until they find a wealthy heiress for one of them to marry. However, their scheming is soon complicated by true love and a band of thieves.
“Farquhar wrote what made him laugh,” says O’Hagan. “The play pokes holes and has fun with the moral and societal strictures of the time, but he lets the political ideas come through without being terribly overt.”
Photo: University of Wyoming theatre students rehearse a scene from the comedy “The Beaux’ Stratagem” that can be seen Feb. 7-11 at 7:30 p.m. on the Fine Arts Main Stage. From left are Jason Nieldbalski, Cheyenne; Jeremy Gross, Riverton; and Sean Higgins, San Rafael, Calif. (UW Photo)
Sort By Category By Month By Year
Cancel