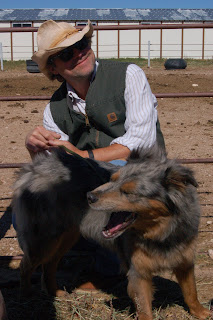 Southern literature in the tradition of Flannery O’Connor and Eudora Welty is alive and well and living in — of all places — Wyoming.

Reviewers are praising the southern literature heritage found in “Aliens in the Prime of Their Lives,” the recent collection of stories written by University of Wyoming English Professor Brad Watson.

The book’s popularity comes as no surprise to Watson’s readers, who got a taste of his unique southern perspective in Watson’s previous works, “Last Days of the Dog-Men,” and “Heaven of Mercury,” for which he was nominated for the 2002 National Book Award in Fiction.

Torday continues, “Watson’s South is modernized, but it breathes the same gothic, aesthetically precise breaths as the finest Southern writing. The ability of a writer like Watson to emigrate from his South and migrate his Southern sensibility into his writing keeps Southern literature breathing. It’s not lost on a reader that Watson himself lives and teaches in Wyoming today, not Alabama or Mississippi.”

“They (the stories) plainly depict the importance of resilience in a world determined to undermine it,” he writes. “Brad Watson’s characters foul up their lives, as fathers, as sons, but they keep on.”

But Freeman thinks too much is made of Watson writing about the South.

“The setting is the American South, but … like Welty and O’Connor before him, he simply writes — and that’s why he gets it right.”

For more information and links to additional reviews, visit http://www.bradwatsonfiction.blogspot.com/