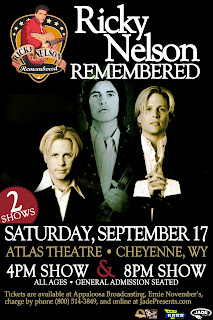 From a press release:
He is the only artist to have a No. 1 song, No. 1 movie and No. 1 TV show in the same week. Life Magazine coined the phrase ‘Teen Idol’ after him and he is credited with pioneering the country rock sound. Rock and Roll Hall of Famer Ricky Nelson’s life and music touched millions; his twin sons, multi-platinum recording artists, Matthew & Gunnar Nelson, relive the music and memories in their multi-media event, Ricky Nelson Remembered.
Ricky Nelson Remembered is live in Cheyenne, Wyo., on Saturday, September 17, for two shows at 4 p.m. and 8 p.m. at the Atlas Theatre. Reserved seating costs $35. Applicable fees may apply. Tickets can be purchased at Ernie November, KRRR FM office, via phone at (800) 514-3849 or online at Tickets300.com. Doors open one hour prior to performances.
Featuring hit songs like “Hello Mary Lou,” “Poor Little Fool,” “Travelin’ Man,” “I’m Walkin’,” “I Gotta Feeling,” “Teenage Idol,” “Garden Party” and many more, RNR showcases his life with never-before-seen interviews from artists he influenced, including Paul McCartney and Chris Isaak. Matthew and Gunnar’s musical event is heartfelt and full of laughter.
Ricky Nelson died in a plane crash on his way to perform a New Year’s even concert in 1986. He left a legacy that included 53 hit singles on the Billboard Hot 100 and nineteen other top-ten hits.  He is one of the biggest-selling artists of all time, a Golden Globe winner for his performance alongside John Wayne in Rio Bravo and in the Rockabilly Hall of Fame.
From Ozzie and Harriet to Ricky to Matthew and Gunnar, the Nelson’s are listed in the Guinness Book of World Records as the only family in history with three successive generations of No. 1 hit makers. Matthew and Gunnar are also nephews of NCIS star, Mark Harmon, on their mother’s side.
The Atlas Theatre is located at 211 West Lincolnway, in Cheyenne. Visit http://www.RickyNelsonRemembered.com for additional information.
FMI: Melissa Kucirek, Melissa@jadepresents.com , 402-677-0930
Sort By Category By Month By Year
Cancel