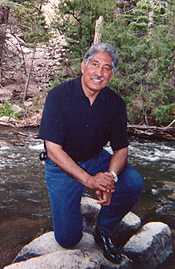 The multi-talented Robert Greer will come to the  Holiday Inn on Saturday, June 4, to speak at the annual banquet of the Wyoming NAACP. His theme will be the contributions that African-Americans made to the history of the West. He will sign copies of his books from 6-7 p.m.. Dinner will follow, with Dr. Greer’s speech at 8 p.m. Tickets are $35 per person, $50 per couple. You can purchase tickets for the event by calling Abe Stevenson at 307-634-8304 or Bennie McLaughlin, 307-634-5527.
When he’s not writing, Dr. Greer is a professor of pathology, medicine, surgery and dentistry at the University of Colorado Health Sciences Center in . He also holds a master’s degree in creative writing from and an Honorary Doctorate of Humane Letters from , his alma mater.


Greer has lived in for thirty years. In 1986 he founded The High Plains Literary Review and continues to serve as its editor-in-chief. He is the author or co-author of three medical textbooks and over 125 scientific articles. His short stories have appeared in dozens of national literary magazines and his short story collection, Isolation and Other Stories, published in 2000 by the Davies Group Publishers, is also wonderfully illustrated.

Greer has been involved in cancer research at the University of Colorado Health Sciences Center for more than thirty years. In 1983 his research group was the first in the world to report a synergistic link between smokeless tobacco use and human papillomaviruses in certain cancers of the mouth. That research foundation is the basis for the plot of his novel, The Devil’s Hatband, the author’s first novel featuring Denver bail bondsman and detective CJ Floyd. Several of his novels are set in Wyoming.


Spoon, Greer’s 2009 novel of the contemporary American West, won the Colorado Book Award for literary fiction. It also was a finalist for the Western Writers of America Spur Award and received the Rocky Mountain Farmers Union 2010 Media of the Year Award. ’s Craig Johnson, author of Another Man’s Moccasins and The Dark Horse , had this to say about the novel: “With Spoon, Robert Greer tells the story of a modern-day range war in wildfire prose both taut and lyrical.”


Greer also reviews books for a Denver National Public Radio affiliate, KUVO, and raises cattle on a ranch in .
Sort By Category By Month By Year
Cancel