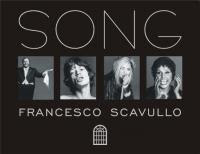 The West Nebraska Arts Center is pleased to present a collection from the works of distinguished photographer, Francesco Scavullo. (1921-2004) This collection will be on display at the West Nebraska Arts Center from January 4th through January 26th. A public opening reception will be held on Friday, January 4th from 6-8 p.m. The event is sponsored by John and Pamela Kabalin.

Scavullo’s photographs have graced the covers of numerous magazines such as Rolling Stone, Life, Time, Town & Country, Harper’s Bazaar, Vogue, Mademoiselle, Glamour, Cosmopolitan, Harpers & Queen, L’Officiel, Woman and Max. He shot many movie posters as well, including A Star is Born with Barbra Streisand and Victor, Victoria with Julie Andrews.

During the 1950s and the early 1960s, Scavullo was a popular fashion photographer. The turning point in his career came in 1965 when Cosmopolitan editor Helen Gurley Brown hired him to help develop an edgier image for the magazine. Scavullo was given creative control over models, wardrobe, make-up and hair styling. It was through his vision that the modern “Cosmo girl” was created. He continued shooting cover shots for the magazine for the next three decades.

As a director, Scavullo created memorable spots for Shearson Lehman Brothers, Covermark, and Memorex with Ella Fitzgerald, as well as Crystal Gayle’s one hour musical special for CBS. Additionally he published six books. Scavullo’s photographs are in the permanent collection of the Metropolitan Museum of Art and the Amon Carter Museum in Fort Worth, Texas.

Also included in the exhibit will be work by acclaimed pop artists Andy Warhol, (1928-1987) James Rosenquist, Alexander Calder and others. Andy Warhol became an iconic figure in the 70’s, famous for his sayings, such as, “In the future everybody will be world famous for fifteen minutes,” and his paintings, which included The Campbell Soup Cans. James Rosenquist is known for taking disproportionate images and combing them to form visual narratives. Both artists have created images of Marilyn Monroe, which will be on display along with the Scavullo collection. These paintings are on loan from the Hastings College Permanent Collection of Art.

The West Nebraska Arts Center (WNAC) is a cultural non-profit organization committed to education, awareness and excellence in the arts, serving the North Platte Valley Region. WNAC is located at 106 East 18th Street in Scottsbluff, NE. Visit the gallery Monday through Friday from 8 to 5, and Saturday from 1 to 5. Admission is free.