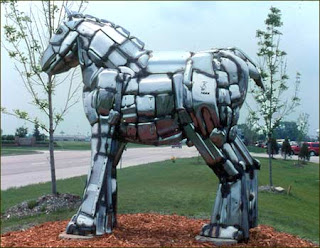 
Two sculptures from the University of Wyoming Art Museum collection are scheduled to be installed at two locations in Laramie. On Wednesday, July 30, Chicago artist John Kearny’s sculpture, Alligator, will be placed at the Laramie City Annex at the corner of Fourth Avenue and Grand Street. Robert Russin’s bronze sculpture First Steps will be located at Undine Park before the annual Art in the Parks in early August.
Kearny is known for his fanciful sculptures of animals created from welded steel car bumpers. Kearny is represented in major collections in the U.S., including the Museum of Contemporary Art, Chicago; the Ulrich Museum of Art, Wichita; and the Detroit Children’s Museum. Since 1951, he has had numerous one-person shows in the U.S. and Italy. Awards include a Fulbright Award to Italy and an Italian Government Grant (both in 1963-64), and a Wallace Truman Price at the National Academic of Design (1953). Kearney studied at the Cranbrook Academy of Art (Bloomfield Hills, Mich.) and the Universita per Stranieri (Perugia, Italy). His studio in Chicago is part of the Contemporary Art Workshop, a non-profit organization which supports and promotes Chicago and vicinity emerging and mid-career artists. Alligator was created in 1973 and was gifted to the Art Museum by Mr. Harris J. Klein in 1974.
Russin’s sculpture First Steps will join other works on permanent view locally including the artist’s most prized depiction of Abraham Lincoln at the summit of I-80 between Laramie and Cheyenne, the Wyoming Family on Prexy’s Pasture, and Ben Franklin near the Arts and Science building on campus. Smaller works may be seen at the Laramie Recreation Center (XXXX) and Ivinson Memorial Hospital. An Emeritus Professor of UW and an A&S Outstanding Former Faculty Member, Russin was born in New York City and earned his Bachelor of Arts and Master of Arts degrees at the College of the City (New York). He had a graduate fellowship at the Beaux Arts Institute of Design. He taught at Cooper Union College before moving to Laramie in 1947 to become a faculty member of the Art Department where he taught for nearly 40 years. He is fondly remembered by his students whom he motivated and inspired. Russin died in December of 2007, at the age of 93. First Steps was created c. 1972 and was gifted to the UW Art Museum in 1991 by Isadore Familian.
Alligator and First Steps are two of 17 works that comprise Sculpture: A Wyoming Invitational, an exhibition of public art on the UW campus and in Laramie organized by the UW Art Museum. The exhibition officially opens with an opening celebration on Friday, September 12, from 4 – 6 p.m. on Prexy’s Pasture and will continue through July 2009.
“Imagine learning from the masters” is a guiding principle of the UW Art Museum’s programs . The Art Museum and Museum Store are located in the Centennial Complex at 22nd and Willett Drive in Laramie. Both are open Monday through Friday from 10:00 a.m. to 5:00 p.m. through the summer. Admission is free.
For more information, call (307) 766-6622 or visit www.uwyo.edu/artmuseum or the museum’s blog, http://www.uwartmuseum.blogspot.com/
Sort By Category By Month By Year
Cancel