See the movie — but read this book first 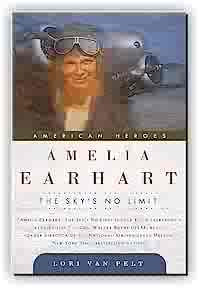 Now out in paperback (and just in time for the release of the movie Amelia):

Amelia Earhart: The Sky’s No Limit by Lori Van Pelt of Saratoga, winner of a 2010 creative writing fellowship from the Wyoming Arts Council

One of three books in the nation named to the New York Public Library’s “Best Books for the Teen Age 2006.”

“Amelia Earhart: The Sky’s No Limit should be on everybody’s reading list, for it reminds us of just how brave America’s ‘Lady Lindy’ was … Lori Van Pelt succeeds in capturing Amelia’s personality as well as those of the many celebrities who surrounded her. This exceedingly well-written tribute to Amelia Earhart portrays her as a true American Hero.”
—Col. Walter Boyne (USAF, ret.), former director of the National Air and Space Museum, New York Times bestselling author.