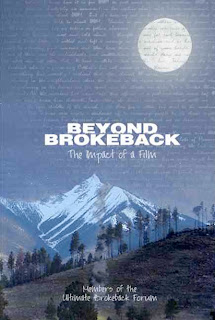 The 15th Annual SHEPARD SYMPOSIUM ON SOCIAL JUSTICE COMMEMORATES the 5th ANNIVERSARY OF BROKEBACK MOUNTAIN WITH STAGED READING OF BEYOND BROKEBACK IN LARAMIE on April 8.

Beyond Brokeback was adapted for the stage by Cody, Wyoming’s, Gregory Hinton from the book Beyond Brokeback: Impact of a Film written by Members of the Ultimate Brokeback Forum, a web community which formed in the aftermath of the release of the award-winning film, Brokeback Mountain. The story was written by Wyoming author Annie Proulx. It was first published in The New Yorker and was in her book Close Range: Wyoming Stories.

The Forum, comprised of people from all walks of life — country, city, gay, straight, men, women, young, old — received over 500,000 posts in the first year. Excerpts of essays, poetry and music inspired by the film will be presented, including the song “Meet Me on the Mountain,” written by noted composer Shawn Kirchner.

Beyond Brokeback was originally performed at the Autry National Center Museum of the American West in Los Angeles on December 11, 2010, in commemoration of the 5th Anniversary of Ang Lee’s seminal western film, Brokeback Mountain.

The event is free but registration is required.

Speakers for the symposium include Cherrie Moraga, John Corvino, Mary Cowhey, and A Slice of Rice, Frijoles, and Greens.