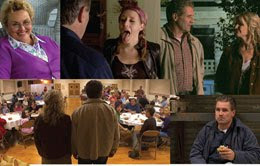 Accomplished Second City Theater alumni Rick and Laura Hall will show the new original short film, “Slice of Pie” at 7 p.m. Friday, Aug. 27, on the University of Wyoming Fine Arts Center Main Stage. The event is free and open to the public.

The film is gleaned from Rick Hall’s small-town stories called “Spellbinding” published by The New York Times. “Slice of Pie” is a humorous and heartfelt romantic comedy about the sweetness of exploring life’s smaller moments.

The UW Department of Theatre and Dance hosts the Halls this week as part of its Guest Artist Series, which is sponsored by the Wyoming State Legislature through the Excellence in Higher Education Endowment. They will work with student performers and playwrights, presenting workshops on acting, musical theater, auditioning and playwriting.

Rick Hall is a writer/actor/producer who spent many years on the Chicago theater scene before joining Hollywood’s film and television community. He has been involved with several films and a variety of television shows, such as “Curb Your Enthusiasm,” “24,” “Without a Trace,” “Seinfeld,” “Saving Grace” and “Everybody Loves Raymond.”

Laura Hall is probably best known as the improvisational pianist on television’s “Whose Line Is It Anyway.” She also performed on “The Drew Carey Show” live episodes, and has toured the country doing live performances with “Drew Carey and the Improv All Stars.”

Photo: “Slice of Pie,” a short film based on Rick Hall’s small-town stories, will play at 7 p.m. Friday, Aug. 27, in the University of Wyoming Fine Arts Center.