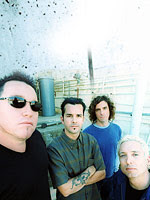 Thursday, August 2, Smash Mouth performs at 8 p.m. at the Sweetwater County Fair in Rock Springs. Smash Mouth formed in the mid-nineties in San Jose, California and had their first hit with the ’50s-influenced “Walkin’ on the Sun.” Other big hits from the garage-and-surfin’-influenced group include “All Star” and the 60s group, The Monkees’ “I’m A Believer,” both made even more popular and recognizable by the Shrek soundtrack.