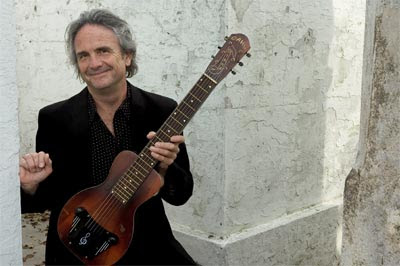 Hannah Wiest wrote a feature about musician Spencer Bohren in today’s Casper Star-Tribune. Spencer is back to his old stomping grounds of Casper for a concert at 6:30 p.m. on Friday, Feb. 29, at the Nicolaysen Art Museum, 400 E. Collins Drive. Tickets are $10 at the door, and children get in free. While there, you can view Spencer’s shadowbox art exhibit, “Petite Mysteries.”
Spencer has a new album, “Long Black Line,” based on his experiences in New Orleans during and after Hurricane Katrina.
Here’s an excerpt from the Trib article:

For Bohren, one of the most poignant remnants of the hurricane was the flood line that still streaks across shop walls and playground equipment. Sometimes the cruddy black line is ankle deep, sometimes over his head.

The title of his latest album, “Long Black Line,” was inspired by this line, this constant reminder of the crisis that has somehow drawn the people of New Orleans together. The title and the song of the same name also refer to the long, frustrating lines of people waiting for food, shelter and help from the government, long lines that were often turned away.

“I had the song delivered to me from wherever they’re delivered from,” he said. The song and the album have both received significant radio play in New Orleans, becoming a sort of anthem for the people. “The song jump-started a conversation that was difficult to start,” Bohren said.

Listen to the song at http://www.spencerbohren.com/music/long-black-line-song.php
FMI: Call the Nic at 307-235-5247
Sort By Category By Month By Year
Cancel