Suzanne Morlock’s work is "Pop’d from the Panel"

Suzanne’s sweater is in the “Pop’d from the Panel” (cartoon panel, that is) exhibit at the museum through Dec. 11. Work by Andy Warhol, Ray Lichtenstein, Christo and Jeanne-Claude, Nina Bovasso and others are included in “an exhibition exploring the juncture of comic art and fine art,” according to museum promo material.

Suzanne’s sweater gained some notoriety in Jackson when it was installed at ArtSpot along the town’s main drag last winter. After more than two decades as an artist, Suzanne became known around town as “the sweater lady.” To read more about Suzanne and her recent work, read a New West article by Jackson’s Matt Irwin at http://www.newwest.net/topic/article/jackson_hole_artist_turns_scraps_into_sculptures/C35/L35/ 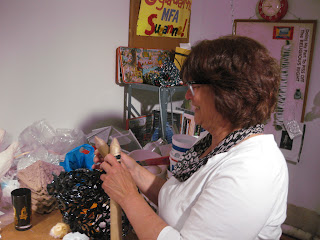 On Tuesday, Wyomingarts and WAC fellowship curator Nancy Bowen visited Suzanne’s home studio outside Wilson. Looping tendrils of renegade hops plants climbed up porch rails and threatened to invade the hillside house. Her architect husband Glenn used to make beer with his homegrown hops but has been laid low with a debilitating disease. In some ways, the overgrown hops and herbs and peonies resemble one of Suzanne’s big arts installations.

Suzanne collects many materials in her search for the right colors and textures for her large installations. The Charlie Brown sweater was made from cast-off Mylar sheets from the landfill. She recently found rolls of yellow plastic insulation materials at the Habitat for Humanity Restore. She may be using that in a library installation about favorite children’s books. Suzanne works part-time at the Teton County Public Library.

And then there are the gigantic knitting needles she used to knit installations such as “Magic Carpet Ride” in Lodz, Poland, earlier this year. She collected stacks of Polish newspapers, braided them into ropes and then knitted them into a huge recycled newsprint web. All the news that fits!

In her basement studio Tuesday night, Suzanne demonstrated her experimental effort to knit together thin wire and cast-off VHS tape into a project yet to be determined. Her knitting needles were each two-feet-long. But that’s nothing. She has ten-foot knitting needles made from PVC pipe for even larger projects.

Suzanne’s work will be part of the WAC fellowship biennial that opens Nov. 4 at the Center for the Arts in Jackson.