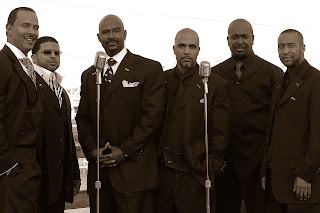 From a UW press release:
Grammy Award-winning Take 6, an a cappella group, takes the stage at 7:30 p.m. Friday, Feb. 24, in the University of Wyoming Arts and Sciences auditorium.
Admission is free to UW students with a valid ID, $23 for senior citizens and $27 for others. For tickets, call (307) 766-6666 or visit www.uwyo.edu/finearts .
Take 6 was founded at Oakwood College in Huntsville, Ala. The group began as a gospel sextet, but evolved by integrating traditional gospel with R&B, jazz and pop music. The group’s latest CD, “The Standard,” is straight jazz.
The group has won10 Grammy awards and one Soul Train award, and holds the honor of being the most Grammy-nominated vocal group in history. Take 6 has collaborated with artists such as Stevie Wonder, Ella Fitzgerald, the late Whitney Houston, Ray Charles, Queen Latifah, Quincy Jones and k.d. lang. The group provided the sound track for “Dick Tracy” as well as Spike Lee’s “Do the Right Thing” and John Singleton’s “Boyz n the Hood.”
For more information, visit http://www.take6.com.
Photo: Grammy Award-winning Take 6 performs at 7:30 p.m. Friday, Feb. 24, in the University of Wyoming Arts and Sciences auditorium. (Anthony Scarlatti Photo)
Sort By Category By Month By Year
Cancel