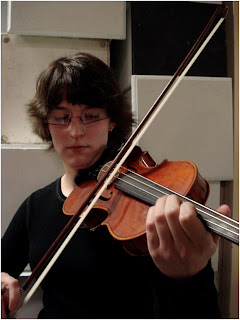 Telling Stories is a fixture in the Denver area musical scene. Their performances, which often mix music and other art forms, have drawn large audiences in and around Denver since 2006.

Westword magazine hails their “casual presentations of chamber works and readings of original essays,” calling them a “merry troupe of young virtuosos.”

Thomas Blomster conducts Telling Stories. His recent composition, “A Brighton Serenade,” is, in his own words, a “summation of my interests” ranging from Frank Zappa to J.S. Bach.

Telling Stories will apply their prodigious skill and dedication to music by UW’s top-notch Composition Seminar. These experienced composers have written for several media, but for this concert will present music for various subsets of the traditional “Pierrot” ensemble (flute, clarinet, violin, cello, piano, and percussion). The pieces are an eclectic group–provocative (Pollock), edgy (Pendleton), humorous (Smith), sophisticated (Machado), assertive (Gunnels), and pensive (Galbreath).

The composers will discuss their works at a reception that will take place following the concert, at a venue to be announced. For more information e-mail Anne Guzzo, guzzo@uwyo.edu .

Photo: Amber Pollock is among the UW student composers who will have their works showcased by the award-winning music ensemble, Telling Stories, Saturday, Oct. 30, at 3 p.m. in the UW Fine Arts Center concert hall.