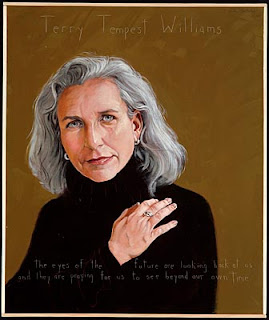 On December 5, Terry Tempest Williams came to Cheyenne for a reading and discussion. The presentation took place at the new Laramie County Public Library, a brand new three story facility with fantastic new space and all kinds of activities. We were up on the children’s floor in the arts and crafts room. The acoustics were great. Alan Paul Barstow, the graduate assistant for the project that Terry is currently working on, and an excellent writer himself, opened up, explaining about the purpose of the environmental “Weather Report” that Terry is undertaking in the state of Wyoming. They will visit several cities and towns in the state, talking to the people who live and work there, finding out what the pressing issues are concerning these communities.

Terry introduced herself to all of the approximately twenty-five people that attended, shaking their hands, asking about their lives. It was an intimate and relaxed gathering. Alan introduced me and I read part of a piece that I had worked on during her MFA workshop that she also instructed as the Eminent Professor at UW this semester. The workshop has centered around “place,” and however we interpeted that theme from the maps we made of our lives. There was such amazing scope and a wealth of writing from all of the talented students in that class. And though she needed no introduction because she had done that already with each person in the room, I introduced her.

She read excerpts from “Red,” a collection of writing about the desert and canyon country of southern Utah. Her stance is for the land and the protection of it, because it cannot protect itself. “What stories do we tell that evoke a sense of place,” is an overarching theme not only to Terry’s writing, but to the way she lives her life. She said that conversation is the first and last place to reconcile our differences over environmental issues. She also read a beautiful piece, “Why I Write,” and it was poetic and wonderful. She also related her story of the group of people (herself included) in the community she lived in near Moab who got together to stop the development of 600 acres of land along the Colorado River corridor. Sometime during the night of the day when the offer to buy the land from the developers had been finalized, the for sale sign was mysteriously moved to the Arches National Park and placed in front of the arch. Several people called. The Park Service was called in and eventually removed the sign. It is this passion and commitment to saving the last wild and “minimalist” places on earth that takes Terry far and wide, and near and close at the same time.
She opened up the floor for discussion and it was interesting to hear so many diverse opinions about this community: from a school teacher and her husband who had lived here 60 years, another man who had lived here 25 years, a woman who had come from California to retire, a

young woman who was visiting from Michigan and another from northern Colorado.
The library made us leave because the lights turn off at 9:00 p.m. sharp and nothing can be manually turned back on. As the last of us scurried out, the evening seemed much too short.
Sort By Category By Month By Year
Cancel