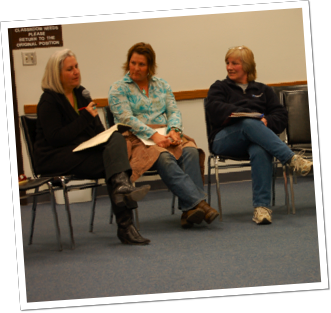 On May 5th, Terry Tempest Williams and the graduate student “Weather Report” team held their final “Report.” The following story appeared in the Boomerang on May 6, by staff writer Eve Newman.

Every Wyoming resident has a story about living in Wyoming. For many, those stories have to do with the latest boom cycle and the unprecedented change that’s affecting the land and the people. For others, their stories are about displacement, loss, love, racism, isolation, tolerance or opportunity.

Many Wyoming residents had the chance to share their stories in a public setting this year as part of a project organized by author Terry Tempest Williams, eminent writer-in-residence at the University of Wyoming, and a group of graduate students in the creative writing department at UW.

Through a series of “Weather Reports,” Williams and the students visited seven towns around the state to give readings of their work, teach writing workshops and talk with several dozen residents at each stop about what it means to live in Wyoming. Yesterday they gave a report about the project. They talked about what they learned at each stop, the surprising complexity of the issues affecting the state, and the importance of listening.

In Pinedale, the group arrived as the town discovered wells polluted with benzene and was dealing with ozone alerts issued by the Department of Environmental Quality. “We just listened and took notes,” said student Brendan Magone. He read a list of quotes the audience said that night:

“We didn’t know what we were up against.”
“I like seeing new faces and diverse faces here in town.”
“We have to go with it and learn to manage it better.”
“We have to fight for it.”

In Riverton, residents talked about wanting the same things for their community even though they started with different agendas, according to student Josh Olenslager. “I think people carried away a closer sense of understanding with their neighbors,” he said.

In Ethete, the audience talked about social and emotional issues, from being an outsider to racism to tolerance and acceptance.

In Gillette, talk again turned to energy development — fitting for a town with 20 coal-bed methane wells in 1980 and more than 30,000 today, with plans to push that number to more than 80,000 by 2010. “Those facts were daunting,” Williams said. “I didn’t know what to expect.” She also remembered a trip one morning to a sage grouse lek in the area, surrounded by quiet because the drilling stops during breeding season. “It was just one of those sacred moments where you think, ‘I’m so grateful to be a resident in the state of Wyoming,’” she said.

She called the project and her year at UW “the greatest privilege of my writing life. … I see the state differently.” As for the experience of the graduate students, she said, “I believe that our students were able to bear witness to the power of stories. And they heard the force of their own voices.” She praised UW for the opportunity to engage her students and the state in the project.”If a university cannot be at the forefront of this type of conversation, then what is a university?” she said.

Other cities they visited include Rawlins, Cheyenne and Casper.

Williams, the award-winning author of “Refuge,” and other works, writes about nature and culture. Her latest book, “Mosaic: Finding Beauty in a Broken World,” will be released this year.For more information about “Weather Reports,” visit www.uwyo.edu/ttw.