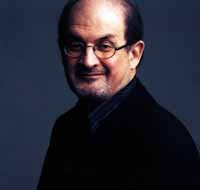 Salman Rushdie, renowned novelist and human rights activist, will visit Laramie this fall as a guest of the University of Wyoming Department of English L.L. Smith Lecture Series.
The internationally-acclaimed writer will speak and answer audience questions at 5 p.m. Thursday, Sept. 25, in the UW College of Arts and Sciences auditorium. The event is free and open to the public.
Friday, Sept. 26, from 9-10:30 a.m at the Albany County Public Library (ACPL), Rushdie will lead a breakfast conversation about his writing. Attendance is free, but seating is limited. To reserve tickets, call (307) 721-2580 ext. 5456 or e-mail albypr@will.state.wy.us. The event is sponsored by the Albany County Public Library Foundation.
Other events planned for Rushdie’s visit include book discussions of “The Satanic Verses” in September, hosted by the ACPL. The University of Wyoming Libraries will provide a limited number of free copies of the novel to the public. Further details about the book discussions will be announced later.
“Salman Rushdie is one of the most successful, controversial and celebrated authors of our time,” says Peter Parolin, head of the UW Department of English. “His work has won critical acclaim and widespread commercial success, while his ideas have stimulated, galvanized and provoked.”

In 1988, Rushdie published “The Satanic Verses,” a satirical novel that explores issues of religious faith and fanatical belief. Rushdie was accused of blasphemy against Islam, and the novel was banned in many Muslim countries. Iran’s Ayatollah Khomeini famously issued a fatwa, or religious proclamation, against Rushdie, calling on all faithful Muslims to put him to death. Rushdie spent much of the next 10 years in hiding. He says he still receives “a sort of Valentine’s card” every year from Iran, to remind him of the sentence.

Despite the fatwah and the international controversy that followed, Rushdie went on to produce some of his most compelling work while living under the constant threat of death. “Shalimar the Clown” (2005) was an international bestseller and a nominee for both the Booker Prize and the Commonwealth Writer’s Prize. He is also a prolific essayist, whose provocative articles are collected in “Step Across This Line” (2002).
Rushdie is currently distinguished writer in residence at Emory University. His 10th novel, “The Enchantress of Florence,” was published this spring.
Sort By Category By Month By Year
Cancel