"The Tempest" coming to Cheyenne 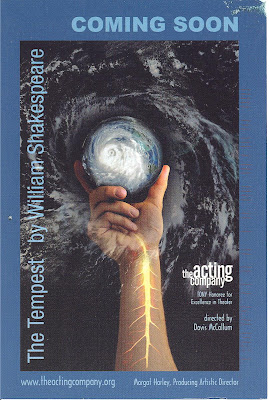 Laramie County Community College and The Wyoming Tribune Eagle presents The Acting Company’s The Tempest by William Shakespeare at 7:30 p.m. on Wednesday, February 27, 2008 at the Cheyenne Civic Center. General admission is $12; $5 for students and seniors. Call the Civic Center at (307) 637-6363 or visit LCCC website at http://www.lccc.wy.edu/

The Tempest is the last work thought to be written solely by Shakespeare. The plot involves Prosepro, rightful Duke of Milan, and his daughter, Miranda, stranded on an island for 12 years. Prospero’s brother, Antonio, with help from Alonso, the King of Naples, sent Prospero and three-year-old Miranda adrift. There are spirits, a witch and her son, and of course, romance for Miranda, all of sixteenth-century design.

As in many of Shakespeare’s plays, the play is itself concerned with its nature. The ending of The Tempest has the audience set Prospero free from his island by their applause.